Member of School Committee, Board of Selectmen 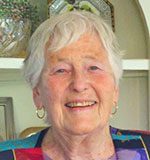 NORTH READING — Ester Victoria (Peterson) Zeimetz, a beloved wife and mother died on Oct. 22, 2015 at Wingate at Reading, after a courageous battle with dementia. She was 92 years old.

Ester was born Oct. 8, 1923 in Boston to the late Charles Richard and Talie Victoria (Zackrisson) Peterson. She grew up in Malden, graduating from high school in 1940. In 1946 she received her Master of Social Work from Simmons College. She married her childhood sweetheart Philip John Zeimetz in 1948. They moved to North Reading where they lived for over 35 years and raised their family. During this time Ester studied at Andover Newton Theological School attaining a master’s in Religious Education. She was employed by the Union Congregational Church as Director of Religious Education. She later worked for the Massachusetts Conference, United Church of Christ in Framingham. Ester was also an active volunteer for a number of community organizations including the Boy Scouts, Camp Fire Girls, church youth groups, Rainbow Girls, student tutoring, the League of Women Voters and the Conservation Commission. She was elected to both the North Reading School Committee and Board of Selectmen where she served for many years, chairing each during her tenure.

After retirement she and Phil moved to Mattapoisett where Ester had summered since childhood. Ester pursued her interests in alternative healing practices by becoming a Practitioner in the Feldenkrais method. She also took classes and practiced Jin Shin Jyutsu, meditation and The Chakras, and explored other types of mind–body healing.

Ester was very active in the Mattapoisett Congregational Church where she served on various committees. She was a member of the choir and also sang with the Sippican Choral Society. She was a student and an instructor at The Second Half at UMass Dartmouth, a program for lifelong learning.

Ester loved singing and music of all types. She was an avid gardener growing both flowers and vegetables. She was always conscious of the environment and served for many years as a water tester for the Buzzards Bay Coalition. Ester was a consummate volunteer who chose causes that helped people and the environment. She was always trying new things to challenge herself and encourage the people around her.

Religion was a large part of Ester’s life and she lived her life based on her beliefs. She was always understanding and forgiving, seeing the good in everyone. Even in the final years of advanced dementia she never forgot to smile and say thank you. She retained her wonderful sense of humor and was always gracious to everyone who cared for her.

Ester was the widow of Philip John Zeimetz who predeceased her in 1997. She will be greatly missed by her children, Anthony Zeimetz and his wife Barbara of Andover, Victoria Rauseo and her husband Paul of St. Augustine, Fla., Steven Zeimetz and his wife Tami of Rochester, N.H. and Cheryl Zeimetz of New Bedford; grandchildren Nicholas Rauseo, Melissa Rauseo, Mark Rauseo, Samuel Rauseo, William Rauseo, Kristen Rourke, Justin Zeimetz, Eric Zeimetz and Emily Zeimetz, and many nieces and nephews.

Ester, always a giver and always thinking of others, donated her body to Tufts Medical School. A memorial service will be held at the Mattapoisett Congregational Church, 27 Church St., Mattapoisett, Wednesday, Nov. 18 at 11 a.m. In lieu of flowers, donations may be made to the Mattapoisett Congregational Church or to the Alzheimer’s Association, 480 Pleasant St., Watertown MA 02472. Arrangements are by the Croswell Funeral Home, North Reading www.croswellfuneralhome.com.