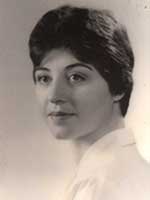 Born in Winthrop, she was the daughter of the late Dino and Jennie (Grandolfi) DiGianvittorio. Terri was a graduate of Saugus High School, Class of 1960, as well as the Chandler School for Women, Class of 1962.

Terri worked for Eastern Bank for over 20 years, before retiring in 2005. She enjoyed knitting, reading, painting and doing crossword puzzles but her favorite pastime was spending time with her children and grandchildren. Terri had a heart of gold and was loved by all who knew her.

Funeral service will be private. Arrangements by the Gately Funeral Home, Melrose.