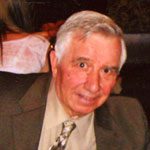 LYNNFIELD — Ettore P. “Tony” Polli, 88, of Lynnfield and formerly of Lynn died on Saturday, September 27 in Wilmington. He was born in Somerville on July 2, 1926 and was the son of the late Isadore and Colomba (Frizzi) Polli.

Mr. Polli was raised in Somerville and later served in the United States Army during World War II. Mr. Polli was a well known Locksmith in Lynn and was the owner of the Superior Lock of Lynn which he operated for 64 years. He had also been a Lynnfield resident for the past 38 years.

Mr. Polli was the beloved husband of Olga M. (Bacci) Polli. He was the loving father of Stephen P. Kelly and his wife Mary of Maine; and the late Michael B. Kelly. He was also the brother of Leo Polli of Burlington, John Polli of Colorado; Laura Biagioni of Weston; and the late Curley Polli. He is also survived by his loving six grandchildren, two great grandchildren and many nieces and nephews.

Mr. Polli’s funeral was held at the McDonald Funeral Home, 19 Yale Avenue, Wakefield, on Wednesday, Oct. 1, followed by a funeral Mass in St. Maria Goretti Church, 112 Chestnut Street Lynnfield, at 10 a.m. Interment with Military Honors will be held at Forest Hill Cemetery in Lynnfield. Visitation for relatives and friends was held at the funeral home on Tuesday, Sept. 30.