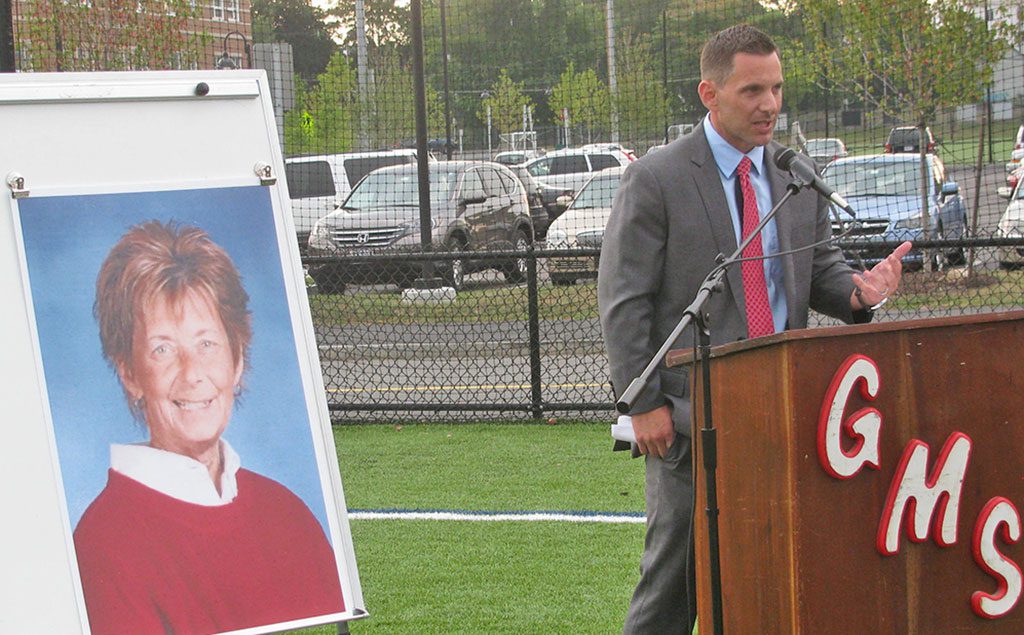 WAKEFIELD — Not even a passing shower could dampen the spirits of the dozens who turned out for yesterday’s dedication of the Dr. Paula M. Mullen Field at the Galvin Middle School.
Teachers and administrative staff past and present joined with friends and family members to pay tribute to one of the most beloved educational leaders to ever serve the Wakefield Public Schools. Dr. Mullen was a respected coach, athletic director, assistant principal and principal.
“Very few people have touched this community in such a deep and profound way as Dr. Paula Mullen,” new School Superintendent Dr. Kim Smith observed. “I would not be Superintendent of the Wakefield Public Schools if it were not for her.”
Smith talked about how Dr. Mullen encouraged her as a young teacher and pushed her to be a leader. Smith noted that Dr. Mullen did that for a lot of people, including the current Galvin principal, Adam Colantuoni.
“But most importantly, she did that for students,” Smith said. An entire generation of Wakefield students experienced Dr. Mullen’s influence, Smith said, going back to her time as Wakefield High School Athletic Director.
“Then she came here to the Galvin Middle School and nothing meant more to her than this school and its children,” Smith said.
“She has meant the world to so many of us and she would be thrilled at all of this,” Smith added. “Her legacy will live forever and it is now truly part of the fabric of our community for all time.”
New Galvin Middle School Principal Adam Colantuoni served as Assistant Principal under Dr. Mullen for two years. He later took a position as principal of a middle school in Hanover before returning to Wakefield this year. He echoed a comment made by Smith.
“I certainly would not be in this position today if I hadn’t crossed paths with Dr. Mullen,” Colantuoni said. “She was an incredible boss but an even more incredible mentor and friend.”
But Colantuoni said that he was most impressed by the way that Dr. Mullen fought for students and would never give up on a student. He said that it was fitting that the ceremony was taking place right before the Wakefield High School varsity girls’ soccer team took the field for the very first game ever played on Dr. Paula M. Mullen Field.
Galvin Assistant Principal Therese Jarmusik said that Dr. Mullen had a way of bringing out the best in everyone.
“Her most favorite students were not the ones who excelled at everything,” Jarmusik said. “Her most favorite were those who struggled and those who got in trouble and those that she could help.”
Jarmusik noted that Dr. Mullen’s battles with cancer did not hold her back. “Like everything else in her life, she took a negative and turned it into a positive.”
Every year at the Galvin Middle School “Moving On” ceremony, Jarmusik noted, an award is given in her name to the Eighth Grader who most embodies Dr. Mullen’s spirit, perseverance and positive attitude.
“She just had such an impact on people’s lives,” Jarmusik said.
She encouraged anyone coming to the new Dr. Paula M. Mullen Field to “reflect on all that she stood for: respect, character, courage and teamwork.”
Jarmusik then invited WHS Varsity Girls’ Soccer team co-captains Isa Cusack and Grace Hurley to cut the ribbon that hung across the goal at one end of the brand new Dr. Paula M. Mullen Field at the Galvin Middle School.