Field hockey team climbs back to the top 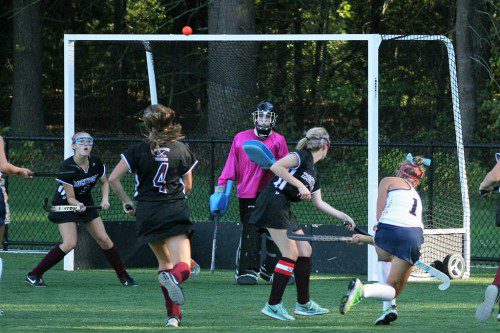 FORWARD Ashley Barrett (1) follows through on one of her two goals against Rockport earlier this season. Last week, she scored a goal against Georgetown, assisted by her twin, Brianna, in the Pioneers’ 5-1 win. (Maria Terris Photo)

LYNNFIELD — The Lady Pioneers climbed back to the top of the league standings and qualified for post-season state tournament play with two wins and a tie last week.

They defeated Georgetown on Monday, October 10 by a decisive 5-1 margin and followed up that victory with a 3-0 non-league shutout over Beverly before ending the week with a 1-1 tie against Triton.

The team’s record is currently 8-2-2 in the Cape Ann League’s large school Kinney division and 9-2-3 overall. Last week, Lynnfield was the first team among the large schools to qualify for the state tournament. 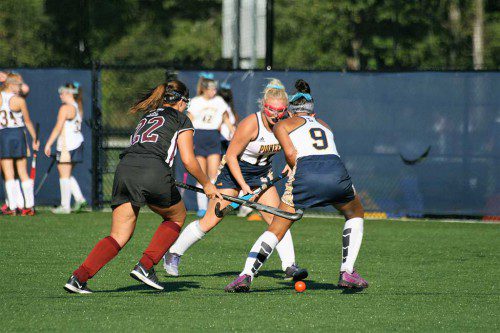 With a roster of 21 players, it can be difficult to get everyone playing time, but head coach Mamie Reardon told the Villager that all of Lynnfield’s varsity players got on the field and contributed to this win against Georgetown.

Lynnfield had earned a 2-0 lead by halftime.

Fortifying the Pioneers’ attack were starting inners seniors Jillian Zahar and Rachel Strout. These girls “were both great contributors on the forward line,” she said. Goalie Lydia Picariello, a junior, had three saves in the victory. “Georgetown’s goal was scored with six minutes left in the game,” Reardon added.

The team’s 3-0 shut out over Beverly “was an improvement from the last game where we tied them 0-0,” Reardon said.

Lynnfield stood with a 1-0 lead after the first half. Jaylin Grabau scored the game-winner. She was assisted by senior forward Jillian Zahar.

The final two goals were scored unassisted in the second half. Ashley Barrett increased Lynnfield’s lead to 2-0 while Elise Murphy added an insurance goal for the final 3-0 tally.

“Both of these goals were rebounds off the goalie’s pads,” Reardon said.

“All players that scored or assisted played well, including Min Oliveri, Lilli Patterson, Kathleen Hamm and Abby Buckley. Lydia Picariello had one save.”

On Friday, Lynnfield tied the Triton Vikings 1-1 at home, marking the team’s third tie for the season.

“We seemed to dominate in the first half, but just couldn’t connect on any shots. The teams were knotted in a scoreless time at the half,” the coach said.

“Three minutes into the second half, Triton scored,” Reardon said. “The play was back and forth with some of the momentum going their way.”

“On two breakaways Elise (Murphy) and Jaylin (Grabau) got taken out by their goalie performing a slide tackle,” Reardon said. “With five minutes remaining we were finally able to get the ball by the goalie, who was on the ground,” she said. The goal was scored by Kathleen Hamm with the assist credited to Jaylin Grabau.

Masconomet crept back into the top of the standings this week, tying Lynnfield’s league record of 8-2-2. The Pioneers still lead the Chieftains in the overall rankings with one more non-league win and one fewer non-league loss. Their first meeting ended in a 1-1 tie in the third game of the season.

This combination of factors should create an interesting dynamic between the two teams when they meet again on Thursday, Oct. 20 at home at 3:45 p.m.

The Pioneers then have two night games. They’ll host the Newburyport Clippers at 6 p.m. on Friday, Oct. 21 at Pioneer Stadium. Lynnfield’s 1-0 defeat of the Clippers back on Sept. 16 started a five-game win streak for the Pioneers.

The Blue and Gold will then travel to the land of the Green and Gold when they face North Reading next Wednesday, Oct. 26 for a 7 p.m. start. Lynnfield has a 1-0 lead in this series after shutting out the Hornets 6-0 Sept. 21.