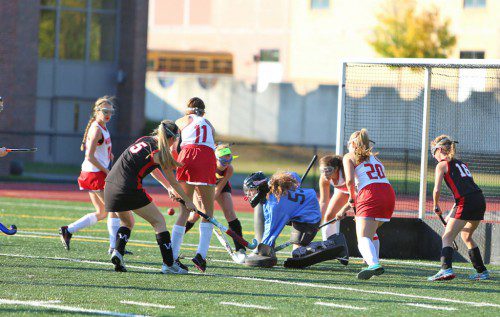 SENIOR GOALIE Miriam Wood (#55) turned away 25 shots by Winchester yesterday afternoon at Beasley Field. Shannon Livingston (#11) and Hayley Kaddaras (#20) help out on the play. The Warriors gave up three first half goals and dropped a 3-0 contest. (Donna Larsson Photo)

WAKEFIELD — The Wakefield Memorial High field hockey team hosted Winchester yesterday and found itself on the losing end of a 3-0 score at Beasley Field.

Wakefield got off to a slow start and Winchester made the Warriors pay. Wakefield fell to 3-6-1 on the season.

“The first half, I don’t know what happened. It’s like they forgot how to play field hockey. I’m taken aback by it because they played so well against Arlington when we beat them 3-2. Going into today we had so much confidence that we would play really well today and then the first half they came out so flat,” said Wakefield coach Cara Luca.

The pressure paid off when Winchester’s Bennett scored to put Winchester up 1-0.

The Sachems doubled their lead just a few minutes later on a goal from  DiBlase.

One reason for the constant pressure by Winchester was its ability to be awarded corners for reasons explained by Luca.

“The team was ‘third partying.’ The were coming in between each other with their feet. Their body was facing the other way (and) the ball was going into them. It’s something we have to work on,” said the coach.

With a little over two minutes left in the half Winchester scored on a goal by DiBlase, her second of the game, to send the Sachems into halftime with a 3-0 lead.

The second half began much the same way for Wakefield with constant pressure by Winchester. It was the goaltending of Miriam Wood, which kept the game from turning into a blowout.

“Miriam was our savior today. I think she had around 24 saves or something like that. She’s phenomenal,” praised Luca.

Wakefield slowly began to pick up its momentum. Jill Cataldo made a number of rushes up the field that resulted in either shots being stopped by Winchester goalie Kayla Bell or were deflected by the Winchester defense.

“Jill’s a really fast player and she’s an aggressive player. All she really had to do was just dodge the ball and pop it in. She’s only a junior and has another whole year,” said Luca.

Despite Wakefield’s resurgence the Warriors could not get on the scoreboard to prevent the shutout.

“(In) The second half they picked it up a little bit and then the last five minutes they played the way they can play. They played with intensity, passing the ball and they just didn’t have it the whole game,” Luca said.

The schedule doesn’t get any easier for Wakefield. The Warriors face Belmont tomorrow night at 6 p.m. at Harris Field and then take on state powerhouse Watertown on Thursday afternoon at 3:45 p.m. at Beasley Field.

Second Half — No Scoring.