Three fumbles lead to a 28-0 setback for Warriors 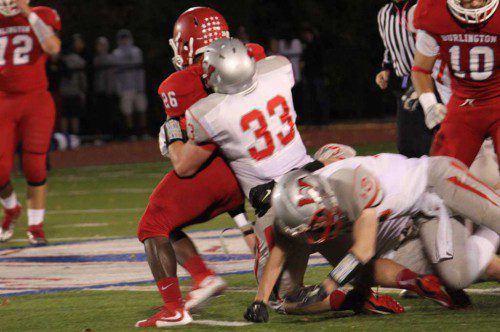 BURLINGTON — The Burlington High football team is a pretty darn good ballclub in its own right. It certainly didn’t need Wakefield’s help on Friday night at Varsity Field.

But that’s what the Red Devils got as the Warriors turned the ball over three times which led to 21 points for Burlington in a 28-0 loss for Wakefield which fell to 1-5 overall on the season and 1-3 in the Middlesex League Freedom division.

All 28 points were scored in the first half including two touchdowns in the final minute of the second quarter as the Red Devils (4-2 overall, 3-1 in the league) were in complete control by halftime. In the second half, Burlington kept the ball on the ground for the most part and ate up the clock to not allow Wakefield to post a comeback.

“We put our defense in some bad spots with the turnovers otherwise this would’ve been a close game,” said Coach Steve Cummings. “They also made a hell of a play on one of their touchdown drives. Their receiver (Jon Orchanian) caught the ball with two defenders on him. They won all the 50-50 balls. Burlington is a very good team and they took advantage of every one of our mistakes.”

The numbers on offense weren’t good, but there were a couple of defensive players that turned in solid efforts. Senior LB Zack Kane led the Warriors with 15 tackles while senior DB Tighe Beck had 10 stops. Junior P.J. Iannuzzi had a sack as well.

Wakefield received the ball first and picked up one first down on a four yard run by senior Kevin Russo. But Wakefield was unable to keep the drive alive and punted the ball away from its own 35.

On Burlington’s first series, which started at its own 30, the Red Devils picked up a pair of first downs on Bonfilio runs of six and two yards. But the drive stalled and Burlington punted the ball away from the 50.

The punt bounced off a Wakefield player and Burlington’s Zach Cyr recovered the live football as Burlington had a first down and 10 from the Warrior 24. The Red Devils needed just three plays to put the ball in the end zone.

O’Halloran gained six yards and then was dropped for a three yard loss. On third down and seven from the Wakefield 21, Bonfilio found Balian in the left side of the end zone with a 21 yard TD pass.

James Mackey added the extra point to give the Red Devils a 7-0 lead with 1:47 left in the first quarter.

Wakefield had the ball just three plays on its next drive before turning the ball over again. Junior QB Kobey Nadeau lost the handle on the ball and O’Halloran recovered the loose football at the Warrior 31 yard line. This time it took the Red Devils nine plays to get into the end for their second touchdown.

Bonfilio’s deep pass for Balian fell incomplete but then he found the senior receiver for an eight yard gain on the final play of the first quarter. Guerrier gained a yard on third down to begin the second quarter setting up a fourth down and one from the Wakefield 22. Guerrier forged ahead for three yards and a first down.

Orchanian then caught a three yard pass before O’Halloran had runs of five and nine yards to set up a first down and goal from the Warrior 2. Bonfilio got a yard on first down and then O’Halloran plunged into the end zone from a yard out.

Mackey added the PAT to give Burlington a 14-0 lead with 7:49 left in the second quarter.

“On the punt the ball took a bad bounce and caromed off the side of our player,” said Cummings. “Then our quarterback put the ball on the ground without being touched. Defensively we played well but they were put in some bad spots.”

Both teams traded three and out possessions. Wakefield then brought the ball into Red Devil territory on their next possession with the key plays being a 12 yard reception by junior WR Alex McKenna and an eight yard run by Russo. On third down and two play from the Burlington 47, Kane was stopped for no gain and Wakefield punted the ball away.

The Red Devils mounted a seven play scoring drive which begin at their own 17.

O’Halloran gained seven, nine, six, and one yard which netted one first down. On a third down and three play from the Burlington 40, Bonfilio found Orchanian down the right side with a 27 yard pass. The Red Devil senior wide receiver made an outstanding play with a leaping catch with two defenders on him.

O’Halloran then had a run of a yard before Bonfilio found Balian with a 32 yard touchdown pass with 42 seconds left in the second quarter. Mackey added the extra point to give the Red Devils a 21-0 lead.

Wakefield turned the ball over for the third time of the night on the ensuring kickoff as Sorrentino returned the ball 10 yards before losing possession of the football. Burlington’s Matt DiRoco recovered the ball at the Warrior 20 with 34 seconds left in the first half.

Mackey kicked his fourth extra point of the night as Burlington took a commanding 28-0 advantage to the locker room.

Burlington took the opening kickoff of the third quarter and picked up one first down on a 13 yard reception by junior WR Mike DeMartinis. But the drive stalled and the Red Devils punted the ball away.

It appeared as if Burlington scored its fifth touchdown of the night as senior halfback James Hoffman took the ball in from 13 yards out, but a holding penalty negated the score. A facemask penalty two plays later on Wakefield set up a first down and goal from the Wakefield 10. But a holding penalty pushed Burlington back 10 yards and the drive eventually stalled as O’Halloran was stopped after a nine yard gain on a fourth down and goal from the Warrior 19.

Wakefield got the ball back at its own 10 but there were only 56 seconds remaining as the Red Devil drive ate up over 12 minutes.

Senior RB Paul McGunigle attempted a halfback option pass on first down and Nadeau had an incompletion on second down. McGunigle then had runs of six yards and five yards as time ran out.

“Offensively Burlington had one great drive with the one fluke play. I thought our defense played fantastic in the second half. Af halftime, we challenged the kids to play hard and they did,” said Cummings. “Burlington is a very balanced team and they’re well coached. If you take away one player, then they have someone else to go to.

“Right now, we need a win against Winchester. We’re fighting for our playoff survival,” added Cummings. “We’ve been self destructive and you can’t give good teams extra chances.”