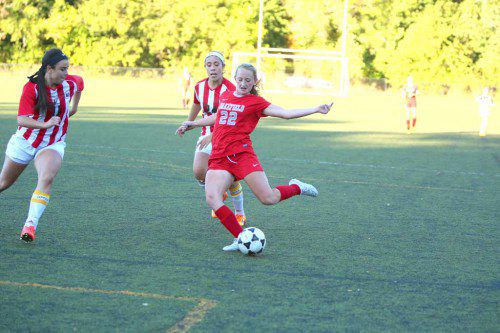 HAILEY LOVELL, a sophomore (#22), scored one of the four Warrior goals in Wakefield’s 4-1 triumph over Melrose on Friday afternoon at Pine Banks. (Donna Larsson Photo)

MELROSE — It was a brisk afternoon at Pine Banks as the Wakefield Memorial High School varsity girls’ soccer team took on the Red Raiders of Melrose High. The Warriors were in a scoring mood as they fired on all cylinders, popping in four goals and winning the match, 4-1.

Melrose jumped out ahead in the first half taking a 1-0 lead. Falling behind early, Wakefield’s defense turned it up a notch after allowing the goal.

“Our defensive line is so much more solid than they were in the first handful of games,” head coach Jessica Marshall said after the win.

A key part of that back line is senior captain Isa Cusack.

“We’ve worked out things with the sweeper and stopper positions and Isa Cusack is an amazing senior captain leader for the back line at right outside mid,” said Marshall. “There’s no doubt to me that her play changed everybody else’s play this game. She played with intensity and what I said to them at the timeout was everybody has to play with the same intensity as Isa right now. She really picked them up, there is no doubt about that.”

“Courtney kills herself in practice. She busts it all the time,” Marshall said. “She deserved a go at it.”

Starting with the solid footing at the back the Warriors began to play confidently, possessing the ball and making threatening runs all over the pitch.

“The girls are realizing that they can play multiple formations and still keep the idea of possession through the middle.”

It was a ball played by Cusack through the middle that found its way to Sarah Grady in the 39th minute. Grady took a touch to control the ball, and then calmly finished past the Melrose keeper to tie the score at 1-1.

The quality play continued into the second half as it took them just six minutes to take command and play a ball over the top to Hailey Lovell. The sophomore then popped it by the goalie and gave the Warriors the lead 2-1.

Wakefield’s player that put in a star performance was senior Mia Joyce. The midfielder is one of the most dominating players on the field for the Warriors and she proved why in the second half against Melrose.

Shortly after Wakefield took the lead, Melrose was putting the pressure on the Wakefield defense and Joyce stuck her boot into a challenge and broke up the attack. Something switched on in Joyce at that point as she went into attack mode.

“Mia is, in my opinion, a better player when she is an emotional player,” Coach Marshall said. “If you make her mad she is going to try to beat you every single time. I love to watch her play with emotion.”

After her stop defensively, Joyce got the ball and brought it into the offensive zone. With some guile, she attempted an audacious shot on goal from about 35 yards away, catching everyone off guard. Everyone except Kelsey Czarnota. As the shot sailed over the keeper’s head, it rattled the crossbar and ricocheted back into play. Czarnota was quick to pounce on the loose ball, timing her run to perfection and finished into the open net to make it 3-1.

With a two goal advantage, Wakefield played well with the lead, never really allowing Melrose to get any momentum going toward the Warriors’ goal, save for one attack with teeth around the 20 minute mark. But Hill was up to the task in net.

With time winding down in the 36th minute in the second half, Joyce was brought down by a Melrose defender in the penalty area and the referee spotted the infraction awarding the spot kick. Joyce stepped up to the spot and sent the goalkeeper diving the wrong way, converting the penalty to make the score 4-1 Wakefield.

The win moves the Warriors to 4-9-2 on the season and keeps their dreams of winning out to make the tournament a possibility. They’ll be tested next week as they take on Burlington and Watertown at home on Tuesday and Thursday before finishing up on Oct. 27  with Senior Night against Bishop Fenwick.

“The schedule slows down a little bit,” Marshall said of her upcoming games. “It’s been so fast the last few weeks with three-game weeks. We’re still looking to finish second in the Small (Middlesex League Freedom division), that’s our goal right now.”

Marshall ended by saying, “We have to win every game, especially Burlington and Watertown and this will be confirming that that’s the direction they should be going in.”

With this win under their belts it should do much for their confidence heading into an important week ahead.