Warriors have another strong preseason outing in Methuen scrimmage 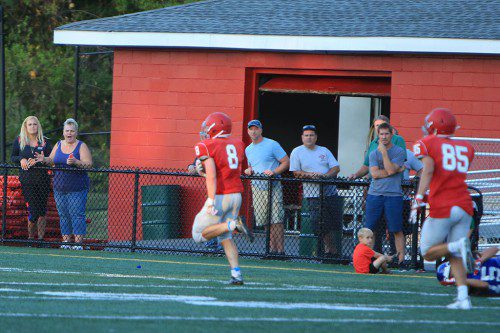 JOE MARINACCIO scored a touchdown on a 70 yard run on a read option play while lining up at quarterback for the play in the Warrior football team’s scrimmage against Methuen on Tuesday night at Landrigan Field. (Donna Larsson Photo)

WAKEFIELD — The season opener is getting nearer for the Wakefield Memorial High football team and it had another very strong showing in its second scrimmage of the preseason on Tuesday night against Methuen at Landrigan Field.

The Warriors had a little wait just to get on Landrigan Field. That was due to the authorities having locked down Hemlock Road due to a stabbing at Breakheart Reservation.

The Warriors and Rangers were able to get on the field once they were allowed by the police and the scrimmage started about 20 minutes later.

“The players and coaches on both sides did a great job alerting their kids to what was happening and the scrimmage went off without a hitch,” said Coach Steve Cummings.

Once the teams started playing, Wakefield had strong performances on both sides of the football.

“Offensively, quarterback Kobey Nadeau had a great day. He took control of our offense, kept us in great rhythm and orchestrated multiple touchdown drives,” said Cummings. “His play fakes on play action were perfect and his ball placement on his throws was probably the best he’s had against a live defense.

“We ran the ball effectively all night. Our offensive line (Charlie Senior, Tom Hayes, Joe Connell, Dan Cataldo and Devin O’Brien) has been getting better every day. They opened huge holes for our rushing attack,” added Cummings. “Ryan Fitzpatrick, Joe Marinaccio and PJ Iannuzzi ran hard. It’s nice to be able to rotate guys in the backfield that can get the job done. If we can run the ball that effectively this year, it will really help open up the offense.”

The highlight of Wakefield’s offensive performance was Marinaccio, in the quarterback spot, taking a read option 70 yards down the sideline for a touchdown.

“He showed great patience and a great burst down the field. Overall, I could not be happier with where our offense is right now,” said Cummings. “We still have some things to tweak here and there but they are jelling as a unit and they should be a lot of fun to watch this year.”

The Warriors also played well on the defensive side of the ball.

“Defensively, we rallied to the football well. Iannuzzi and Marinaccio set the tone from the middle linebacker positions,” said Cummings. “I don’t know if any other team in the Middlesex League has two guys in the middle that can do what these guys do.”

Methuen had one drive where Wakefield missed some keys and it drove down the field and scored on the Warriors.

“Our defensive line was able to create pressure on the quarterback in passing situations and our coverage was good,” said Cummings. “We didn’t give up any big plays, and if we can do that during the season, we should be able to get offenses off the field.

“As a whole, the scrimmage was great. We were physical, we tackled well and we executed assignments. It was good to see some of our young guys get in late and put on a good showing. We have some young guys that are getting better and better every day, and that’s what you want to see out of those guys,” continued Cummings. “Next up, we travel to Manning Field in Lynn to take on Lynn English in a game scrimmage. It will be a good test for us. They are an up and coming program and their athleticism is going to be something that we are going to have to deal with.”

That scrimmage is scheduled for Friday night at 7:30 p.m. Wakefield opens up the regular season on Saturday, Sept. 10 at 1 p.m. against Beverly at Hurd Stadium.