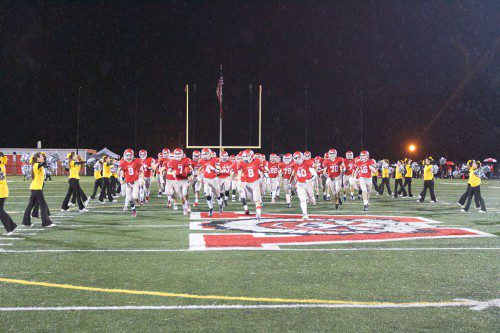 THE WARRIOR football team runs onto Landrigan Field for its game against Wilmington last Friday. Wakefield has an even bigger contest this week when it hosts Stoneham tomorrow night. (Donna Larsson Photo)

WAKEFIELD — Last week’s 26-0 win over Wilmington was important for the Warriors since it was a league win. But the victory may have also served as a dress rehearsal for a much bigger Middlesex League Freedom division clash when the Wakefield Memorial High football team hosts Stoneham tomorrow night at Landrigan Field.

Stoneham enters the game with a perfect 4-0 overall record and 2-0 in the league. Wakefield, meanwhile, is 2-2 overall, but its two wins have come in league play which means the Warriors have the same opportunity as the Spartans to be the only undefeated team in the league after Friday night.

“Stoneham is 4-0 and that is not by accident,” said Coach Steve Cummings. “They have some big linemen and big backs. They are not flashy but when the ball is in their hands, they pound the ball at you and grind out yards.”

The Spartans run a power game much like Wilmington did last week. In fact, Stoneham head coach Bob Almeida is a former coach of the Wildcats and the Spartans play a similar style of football. Only right now Stoneham is a better team with four straight victories to start the season.

“Their coach has identified what they do well and that’s the they way play. That’s why have won four weeks in a row,” said Cummings. “Their quarterback Tre Pignone was a starter when he was a freshman. He has shown his athleticism. He was 5-6, but he is even bigger and more physical now. We saw him score on a 60 yard run against Burlington.”

In addition to Pignone, the Spartans have a tough running back in Tim Russell. Russell rushed for 199 yards on 29 carries with one TD last week for Stoneham in its win over Burlington.

“Russell can play fullback or at the tailback position. A few years ago, Stoneham had four backs that had different skills,” said Cummings. “Now their backs are bigger and run straight ahead. They pull their guards and if there is a time when you miss a block or tackle, they can score on an 88 yarder. They’re patient and they have a lot of threats.”

Of course it helps that the Spartans have size up front for the backs to run behind.

“Their coaching staff takes advantage of their talent. The offense they run is very simplistic. To know what’s coming and to be able to stop it are two completely different things,” said Cummings. “Last year their running back, (Evan) Taylor ran hard. He got to the hole quickly and came right at you.

“Bob Almeida has brought a toughness to the program that you have to respect,” added Cummings. “Defensively they are tough to stop because what they run, they do it well. Their offense is similar to Wilmington’s but they have better personnel and I think the record indicates that.”

Wakefield defeated Stoneham by a 7-6 score on a wet, rainy night on the grass field at Stoneham High School last fall. What helped the Warriors was that they won the turnover battle, taking the ball away four times. That has been Wakefield’s recipe for success against both Watertown and Wilmington the past two weeks.

“We got our first win against them last year. We were banged up and had some injuries,” said Cummings. “Stoneham turned the ball over four times while we didn’t turn the ball over as much and that helped. The field position game is also important against Stoneham. It was a game that could’ve gone either way.”

Wakefield struggled to run the football last year against the Spartans. The Warriors will be hoping to do a better job of grinding out yards tomorrow night.

“Defensively, their scheme isn’t complicated. They line up and come after you,” said Cummings. “They’re like Melrose because what they do, they do it well. They’re so disciplined.”

The winner of tomorrow night’s game will be at least a game up on everybody else in the league. While there are couple of more weeks of league play and an M.L. Freedom division game on Thanksgiving between Wakefield and Melrose, tomorrow night’s winner will be in the driver’s seat.

“The winner will have a huge leg up on everybody else. We still have games against Burlington and Melrose,” said Cummings. “Our goal is to win a league title. If we win this game, then we will control our own destiny.”

Stoneham is no stranger to big games having won Div. 4 North a year ago and came up one victory short of playing in a Super Bowl.

“Stoneham is 4-0. We’re at home, but I’m sure they’ll bring a big crowd. It should be a great atmosphere,” said Cummings. “The weather should be good. I don’t think that makes a difference to Stoneham but that helps us with the passing game.”

The weather had an effect on the Warriors last week, although you wouldn’t know it from the yards they gained against Wilmington. Also from a crowd stand point, Wakefield had a strong turnout from the student body despite the rainy conditions.

“We had a good crowd last week. The student section came out,” said Cummings.

Regardless of the size of the crowd, the Warriors will need to focus on the Spartans.

“Our guys need to step up,” said Cummings. “Stoneham plays to its strengths and we need to be prepared to get a win.”