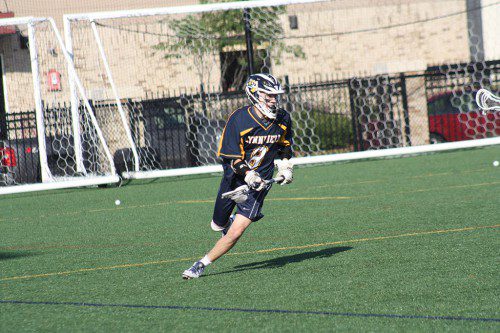 LYNNFIELD — Boys’ lacrosse captains Jake Forgione and Jon Knee were the epitome of student-athletes over the course of their four years at Lynnfield High School.

Forgione and Knee’s athletic and academic accomplishments were recognized last week when the two lacrosse stars were named Academic All-Americans by the Eastern Massachusetts Lacrosse Coaches Association (EMLCA). In order to be recognized for this honor, a lacrosse player has to be ranked in the top 20 of his graduating class.

“It’s definitely an honor,” said Knee. “A lot of my friends are good at sports and academics and it feels great Jake and I were recognized for our accomplishments on the field and in the classroom.”

“It feels great,” said Forgione. “It paid off earlier in the year when Jon and I were recognized for National Honor Society but it feels great to be recognized on the field.”

“I am so proud of the two of them, their families and teammates, the LHS community and the town of Lynnfield for giving these student-athletes the opportunity to compete academically and athletically,” said Papagni. “They are very deserving of the honor.”

According to Papagni, he nominated Knee and Forgione for the Academic All American during a recent EMLCA meeting. He said was informed last week the EMLCA decided to honor both players’ athletic and academic accomplishments.

“I have never had a player eligible for the All-American awards but during the coaches’ meeting where we nominate our players for All-League and All-American, I mentioned I have a few true student-athletes that may qualify for the award,” said Papagni.

Forgione said he was caught off guard by the prestigious award. 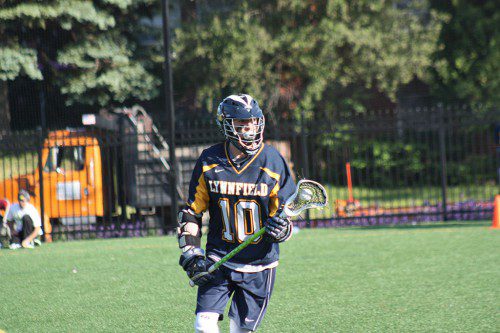 CAPTAIN Jon Knee (10) said it was an honor to be named an Academic All-American by the Eastern Massachusetts Lacrosse Coaches Association last week. He finished his senior year with 42 goals and 35 assists.(Dan Tomasello File Photo)

“I was very surprised,” said Forgione. “I didn’t think we would be named for such a prestigious honor.”

“I was really surprised because I have never heard of this award before until my coach told me we were nominated,” said Knee. “It’s really cool.”

Forgione concluded his senior year with 39 goals and 26 assists.

“It was my best season by far but I couldn’t have done it without my teammates,” said Forgione.

Papagni attributed Forgione’s success on the lacrosse field to the fact he is a “student of the game.”

“Jake has worked very hard for us as our predominant face-off man for three years,” said Papagni. “At 150 pounds, Jake gets the most out of his body and his brains by out maneuvering and out smarting his opponents. Jake wanted to be more than a face-off guy and he was to me. Jake worked and took pride in his face-off ability and because of his ability, we were able to possess the ball on so many more occasions after goals. He won in excess of 75 percent of his face-offs.”

“This was the best season I have played lacrosse,” said Knee. “I don’t think I would have had as good of a season without my teammates. I played well but it took a total team effort.”

Papagni said Knee was the Pioneers’ “ultimate warrior” this spring.

“He just loved to compete,” said Papagni. “The tougher things got, the tougher Jon got. I would always say to Coach Lamusta, it’s time to let Knee take over and Jonny would. He was a total team player and a tenacious competitor. I love coaching and competing in high school athletics because of the competitive spirit young men like Jon Knee exhibit on a daily basis.”

With their high school careers drawn to a close, Forgione will be attending UMass-Amherst this fall. He said he wants to play club lacrosse at UMass-Amherst.

Knee will be attending Macalester College in St. Paul, Minn. He said he is going to be playing football for the Division 3 Scots and will also be looking to play club lacrosse in college.

Papagni said he’s going to miss coaching both players next spring but he noted they have a left a positive mark on the program.

“Because of young men like Jon and Jake, who were able to set the bar and achieve excellence, other players who follow can measure up to their level of expectation,” said Papagni. “We will be a better team and community for these young men being one of us.”