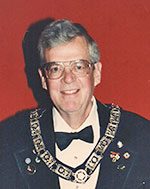 Born in Lynn on Sept. 3,1933, Allan was the son of the late Arthur W. and Bertha (Williams) Nelson. Allan was a graduate of Wakefield High School and Bentley College. He was the former manager and owner of the Sagamore Fuel Company, Inc. in Lynn. Allan served in the U.S. Army during the Korean Conflict.

He was a resident of North Reading for the past 53 years and was a member of the Aldersgate United Methodist Church. He was an honorary life member of the Saugus Elks, where he was a Trustee for 17 years and served as Chaplain for a year. He was chosen Elk of the Year in 1977 to 1978. Allan was a Scoutmaster for Troop 52 in Lynnfield and was also a former Eagle Scout. He was very dedicated to his family. He was a loving husband, father and grandfather.

Family members include his loving wife of 53 years, Gail I. (Fudge) Nelson; his sons, Russell W. Nelson of Nashua, N.H. and Craig R. Nelson and his wife Ivy; grandchildren, Theo and Sarah Nelson, all of Revere. He is also survived by sisters, Janice A. Nelson and Norma L. Jones and her husband James; nephews, Jimmy and Jason Jones, all of West Peabody.

His funeral was held on Tuesday, June 23 at the Aldersgate United Methodist Church, 235 Park St., North Reading. Calling hours were held at the Croswell Funeral Home, 19 Bow St., North Reading on Monday, June 22. Burial in Puritan Lawn Memorial Park Cemetery in Peabody. Memorial donations may be made in his memory to the charity of one’s choice. For more information, visit croswellfuneralhome.com.