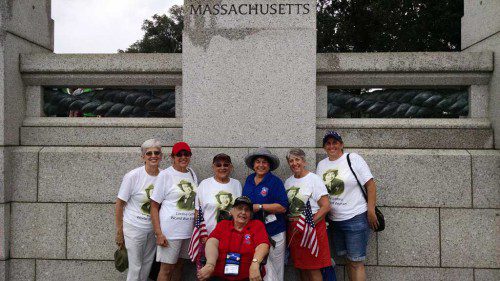 LOUISE DANCA GOBBEO, front center, not only took part in an Honor Flight on July 17 and 18 in Washington, D.C., she was honored by her family members, who joined her in Washington. Standing, from left: Judy Muse, Sally Medico Anastasio, Marge Murray, Mary Danca, Dorothy Harkins and Karen Trembly.

WAKEFIELD — If Wakefield resident Judy Muse were a student writing an essay on “what I did over my summer vacation,” she might write about her trip to Washington, D.C. to honor her beloved Aunt Lou, a San Antonio, Texas resident and World War II veteran who participated in a program for veterans called “Honor Flight” on Friday, July 17 and Saturday, July 18 in Washington, D.C.

Aunt Lou may be remembered by some Wakefield residents when she was Louise Danca Gobbeo. She lived in town in the late 1950s or early 1960s before moving away and relocating to other places, including San Antonio.

Muse’s trip to Washington started with a letter dated June 1 written by Court B. van Sickler, chairman of the Honor Flight program in San Antonio. He was requesting letters from family members that would be read to the veterans on their return flight from Washington during “mail call.”

Sickler wrote: “When a service member is deployed to a war zone, the best feeling in the world is to get a letter from their loved ones and they would receive it during a process called ‘mail call.’ During our flight back from Washington, D.C. to San Antonio, we’ll be holding our very own mail call aboard the aircraft in order to recreate those warm, happy feelings.

“You may want to thank your veteran for their service, for helping save the world or for something personal just between the two of you. The length is not important — it’s the content that counts.”

When Muse read the letter, she wanted to do something extra special for Aunt Lou. A simple letter just would not do. She wanted to go to Washington to surprise her. When Muse’s sister Marge Murray of Brockton heard the plan, she decided to join Muse. So did Aunt Lou’s nice Mary Danca. And while in Washington, Muse’s daughter Karen Trembly, a Maryland resident, drove Muse and Murray to the various stops to coincide with Aunt Lou’s itinerary.

Aunt Lou was not the only veteran to participate in the free of charge Honor Flight. She was joined by a group of other veterans, including those who served during the Korean and Vietnam conflicts. Together, they visited the White House as well as the many war memorials, including the Tomb of the Unknown Soldier at Arlington National Cemetery. “We were all very excited and wore special T-shirts with Aunt Lou’s wartime photo on them,” said Muse.

“Aunt Lou was very close to my mother (her sister), and they traveled together a lot,” Muse continued.

“When I was a very little girl, Aunt Lou worked at Converse Rubber on the Malden-Medford line and walked past my home every day. I always tried to hustle her out of a penny or two for the corner candy store.”

The fact of her enlistment in the military came as no surprise to her family, since Aunt Lou was open to all sorts of adventure and loved food and cooking.

“She was an avid traveler and my mom’s travel buddy,” said Muse. “They traveled extensively and went to Russia the first year it was open to the West.”

Until his death, Aunt Lou was married to Arthur Gobbeo, who also served during World War II. According to Muse, he suffered some permanent hearing loss when a Jeep he was traveling drove over a mine. All on board were killed except Gobbeo. The hearing loss was especially jolting, since Gobbeo was an opera fan and he and Aunt Lou showed their appreciation by hosting dinners for members of the Metropolitan Opera Company.

“Aunt Lou traveled far and wide over the years — including her trip east for her 90th birthday surprise hosted by family,” said Muse. “But this Honor Flight was the icing on the cake. For her, it was the thrill of a lifetime.”