Published in the December 7, 2016 edition 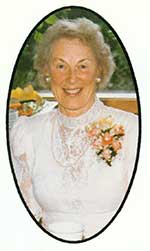 WAKEFIELD — Frances A. Bruen, 91, of Wakefield died peacefully Saturday, Dec. 3, at the Glen Ridge Nursing Care Center surrounded by her family.
She was born in Eastport, Maine on Feb. 4, 1925 and was the daughter of the late Harold and Lila (Hooper) Stackhouse. Raised in Eastport, she was a graduate of the Shead Memorial High School and later graduated from the Newton-Wellesley Hospital School of Nursing where she continued as a registered nurse.
She had been a Wakefield resident since 1956 and was a member of the Garden Club of Wakefield. She was also a volunteer at the Winchester Hospital. She enjoyed bowling, playing the piano and devoting her time to raising her eight children.
Mrs. Bruen was the beloved wife of the late Peter A. Bruen. She was the loving mother of Ellen Bullard and her husband Larry, Peter Bruen and his wife Molly, Fran Bruen, Patty Grabowski and her husband Karl, Ginny Murray and her husband Dan, Laurie Roberto and her husband Fred, Tom Bruen and his wife Lisa and Stephen Bruen and his wife Darlene. She is also survived by her 20 devoted grandchildren and four great-grandchildren. She is pre deceased by her grandchildren Stephanie Bullard and Peter John Roberto and her sisters, Helen Gillis and Mary Grube.
Her funeral will be held from the McDonald Funeral Home, 19 Yale Ave., Wakefield on Friday at 9 a.m. followed by a funeral Mass in St. Joseph Church, 173 Albion St., Wakefield at 10. Interment will be at Forest Glade Cemetery in Wakefield. Visitation for relatives and friends will be held at the funeral home Thursday 4 to 8 p.m.
The family would like to extend their gratitude to the Staff at Glen Ridge Nursing Care Center for their outstanding care and comfort.