Published in the January 5, 2017 edition 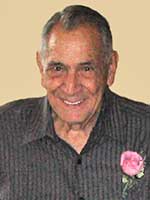 WILMINGTON – Francesco J. Valente, known as “Frank” to his family and friends, of Wilmington, died peacefully at home surrounded by his loving family on December 21, 2016; he was 87 years old.

Frank was born in Revere on October 22, 1929; he was the dear son of the late Alessandro and Elizabeth Valente. Frank was raised in Medford where he attended Medford Public Schools and Medford Vocational High School.

Frank married “his sweetheart” Jeanette Morreo on May 29, 1949; the couple lived in Medford for a few years before moving to Wilmington in 1957, where they raised seven wonderful children.

Frank was known to be an extremely hard worker; he was the founder and former owner of his own Construction Company, Aluminum Age Inc. in North Reading. Frank made quite a reputation for himself by always doing quality work and treating his customers very fair; he built quite a company throughout the year.

Frank will be fondly remembered for his love and devotion to his family, friends, and clients; he will be greatly missed by all who knew and loved him.

In lieu of flowers donations in Frank’s memory may be made to the Winchester Hospital Foundation, Center for Cancer Care, 611 Main St., Winchester, MA 01890. www.nicholsfuneralhome.com.