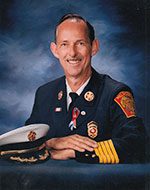 MELROSE — Retired Melrose Fire Chief Frank A. Zinck, Jr., 73, passed away at his home on April 2 surrounded by family.

Frank was born on January 19, 1942 at the Jamaica Plain Osteopathic Hospital to Frank Sr. and Eva (Harris) Zinck.

Frank was a lifelong resident of Melrose; he was raised on Beech Avenue and Staples Street. He attended the Winthrop School, Coolidge School, and went on to graduate from Melrose High School in 1960.

Following high school, Frank attended the Franklin Institute. Frank was always a “spark” as a boy, helping put out fires in the Swains Pond area. Chief Sidney C. Fields realized Frank’s dedication to the city fighting fires and appointed Frank temporarily to the job in January of 1963.

With no broken service time Frank received a 100 percent score on the Civil Service exam and his permanent appointment came in February of 1964. Frank was a dedicated member of the Melrose Fire Department for 39 years, holding the ranks of Lieutenant in 1982, Captain 1988, Fire Prevention Captain 1996, and finally Chief of the Department from 1999 until his retirement in 2002.

Frank married Jean (Keaveney/Mercier) Zinck in August of 1996, joining Jean and her three children to the Zinck family. In addition to being a loving and dedicated husband, father, and grandfather, Frank belonged to a number of local clubs. He was a member of the Wyoming Masonic Lodge, Aleppo Shriner’s, 32 Degree Scottish Rite Mason, Melrose Elks, Associate Member VFW Post 2394, Melrose Lions Club, Mass Fire Chiefs Association, and the Reading Rifle Association.

Frank loved his city and helping people over the years. He had a great sense of humor and a positive attitude. His personality, along with the love of his summer home in Maine and many visits to Florida kept him a very happy person all these years.

Frank loved his family, and his memory will be preserved in all those close to him.