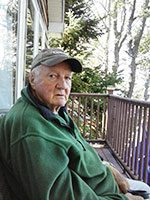 SHAPLEIGH, ME — Frederick M. Britten, a resident of Shapleigh, Maine, and formerly of Melrose, died on Friday, April 3.

Born in Creston, Iowa as Frederick Martin Britten in 1939, he was the fifth of nine children to Martin Nicholas Britten and Dolores (Bryan) Britten. His family moved to Melrose, when he was very young and there he grew up. He officially changed his name to Martin Michael Britten when he joined the Marines at age 17, taking Michael as his middle name in memory of his younger brother who passed away in childhood.

After being honorably discharged from the U.S. Marine Corps he returned to Melrose and met Barbara Jean Hill of Wakefield. She captured his heart; they were married in 1962 and moved to Scarborough, ME where the first of 5 children was born, David M. Their plans to remain in Maine were dashed due to extenuating circumstances and they returned to Melrose, where they had 2 more sons, Martin W. and a year later Francis D.

At first possibility he moved his growing family back to Maine and was blessed with two more children, Daniel F. and Jessica M. Our family lived in Sanford and then Vassalboro, ME before moving to Andover, MA as Dad promoted through the Xerox Corporation ranks. Always his intentions to get back to his adopted state of Maine, we moved to Skowhegan, ME where the 3 oldest children graduated high school (David, Marty and Frank).

Due to Dad’s work requirements, we moved to Tewksbury, MA where Daniel and Jessica would graduate high school. Upon retirement after 35 years with Xerox Corp., Mom and Dad moved to Shapleigh, ME where Dad lived out the remainder of his years.

An avid outdoorsman, he instilled the love of the outdoors in us and we enjoyed many fishing and hunting excursions throughout the years; these memories are invaluable now that he’s gone. Dedicated father, he was always there for us to teach, love and drive us to be better; while growing up whenever we had free time he had plans for us, usually to go camping, hunting or fishing into the northern Maine wilderness, or special trips like camping across country to Alaska or Florida, or some of the many trips to visit other important people in his life, such as his siblings or cousins. The day that Dad passed he was sitting in his typical position on the deck with Mom planning Easter weekend and discussing with her our annual spring fishing trip.

Dad was the most intelligent man I’ve ever known, with sound common sense and understanding of almost every topic. He was a man’s man, larger than life; as his son I felt more masculine just standing beside him. He instilled in us strong moral and ethical fiber that transcends the societal norms of today and it made us stronger and better human beings for it. He provided us (me) invaluable council and (to a fault) would sometimes council whether one needed it or not; but always with the best intentions in mind. He took his role as patriarch very seriously and cared so much for his children and grandchildren that he could not sit idly by and watch things that he fundamentally disagreed with occur. He was not passive by any means and had no issues with confrontation if fighting for what he believed in. I only wish that I could be half the man that he was.

His 53 years of marriage to the same wonderful woman are testimony to their devotion to each other, their children and the sacrament of marriage. He is in heaven now with our Lord and Savior Jesus Christ and His Holy Mother Mary as well as those loved-ones who have passed before him; his parents, 6 siblings: Bryan T, Francis J, Martin F, Rosemarie A, Dorothy C, Michael P. and many others friends and family.

He is survived by his wife Barbara, children David and his wife Beverly of VA, Martin and his wife Traci of ME, Francis and his wife Karen of MA, Daniel and his wife Kristi of PA and Jessica Green and her husband Patrick of MA; siblings Dolores J Vining and Daniel J.; grandchildren Nicholas, David Jr, Bethany, MaryBeth, Nathaniel, Jake, Zachary, Hannah, Gracie, Paidric, Fiona, Daniel, Luke, Paxton, Vanessa and Joanna; great-grandchild Finnegan and many other friends and family members.

His sudden and unexpected passing made such a void in everyone’s hearts.

Dad will be missed; we miss him already more than words can say. He always said to be happy and have a big party after his passing but we’re finding it very difficult to meet his wishes; in fact, we’re failing miserably.

In lieu of flowers, contributions may be made in Martin’s name to the Knights of Columbus, Council # 8868, 19 Dora Lane, Limerick, ME 04048. To sign online condolence visit www.gatelyfh.com