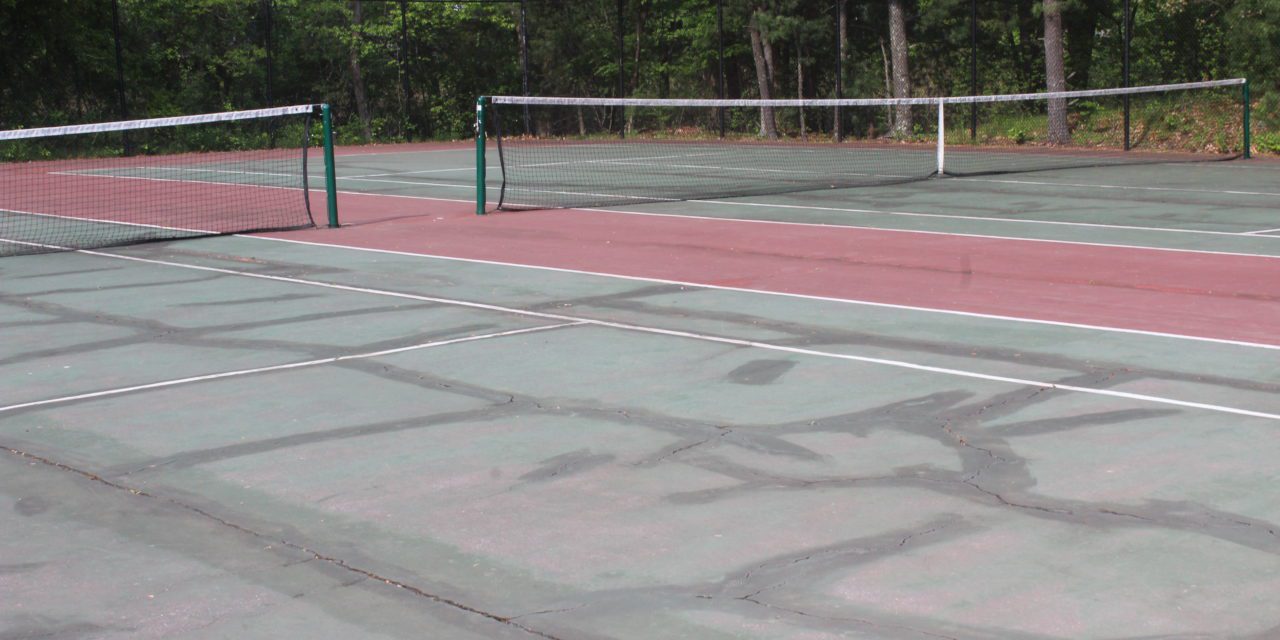 A COMMUNITY FUNDRAISER is going to be launched to replace the Lynnfield High School tennis courts, which are completely covered with cracks. The damage is beyond repair. (Dan Tomasello Photo)

School Committee member Jamie Hayman proposed during a May 16 meeting that a new oversight subcommittee be formed, which would be tasked with overseeing a community fundraiser that will raise money that would go towards replacing the high school’s tennis courts.

“Our tennis courts at Lynnfield High School are a bit of a mess,” said Hayman. “The courts are all cracked and cannot be refinished at this point. We are not able to hold varsity tennis matches there because of the courts’ condition.”

Hayman said a number of parents and residents have expressed interest in helping raise funds to replace the dilapidated tennis courts at LHS.

“There has been a groundswell of support to do this the old fashioned way, which is through fundraising,” said Hayman. “I would like to get the ball rolling because there is a lot of momentum right now.”

“It would provide oversight for a community group that would be responsible for the fundraising that would replace the tennis courts,” said Hayman. “I prefer that five courts be built instead of four, which is what we currently have at the high school. We are still getting preliminary cost estimates, but Rob said the price would be $50,000 a court give or take.”

Hayman said replacing the high school’s tennis courts would allow the courts at Lynnfield Middle School, which is the current home venue for the boys’ and girls’ tennis teams, to be lined for pickleball as well as tennis.

“It would have a much broader community impact,” said Hayman.

School Committee member Kate DePrizio asked if there are any DPW funds that can be used for the project.

“The DPW might be able to do the work, but there are no funds available in any of the budgets,” said Hayman. “The schools have been hesitant to take donations in the past, but if we fundraise the right way, it’s something we can get to over the next couple of years.”

School Committee Vice Chair Stacy Dahlstedt said she supported the fundraising proposal. She said the committee has to make sure the initiative complies with the district’s policies before the fundraiser is launched.

“That is why we are doing it this way,” said Hayman. “I want to make sure we have the right oversight so we are staying true to our policies and our values.”

“We should have a better facility that reflects that quality,” said Hayman.

“They deserve that,” said Dahlstedt.

“It would be great if the high school kids are able to play on campus,” said Vogel. “I love that idea. I also really love the idea of repurposing the Lynnfield Middle School courts into pickleball, which can be incorporated into the middle school physical education curriculum.”

Girls’ tennis head coach Craig Stone told the Villager he is thrilled that the School Committee is looking to have the LHS tennis courts rebuilt.

“I am glad it’s moving to the forefront,” said Stone. “The courts are used by the high school teams, the physical education program at the high school and the community. The last time the tennis courts were reasonably done over was 1991.”

“I was really excited when I heard the news about the fundraiser,” said Dunn. “Lynnfield High School has a great tennis program that has been incredibly successful. Building new courts will certainly benefit the boys’ and girls’ tennis programs.”

The School Committee voted to form the subcommittee on Tuesday, May 24, taking place after deadline.