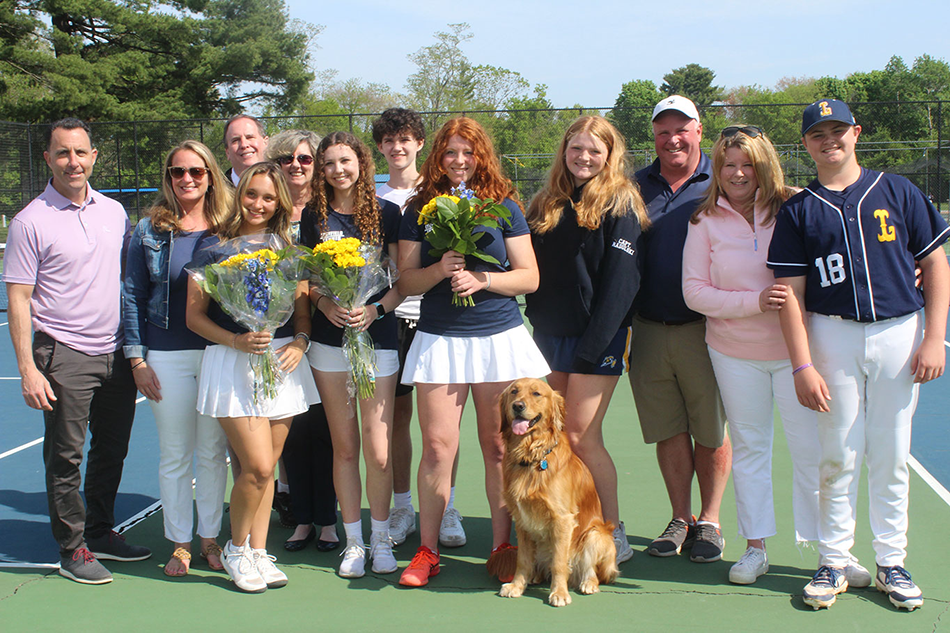 The Pioneers (12-3) earned a decisive 5-0 win over Pentucket on May 20, which was Senior Day. The Pioneers honored senior captain Lauren Grava, senior captain Anna Radulski, senior Sarah Breslow and their respective families before the match.

Radulski cruised to a straight-set victory during second singles, prevailing 6-1, 6-0.

“Lauren and Maddie were in command in the first set, but Pentucket played even in the second before Lynnfield pulled ahead,” said Stone.

“Sarah and Leticia came from behind 4-5 to win the first set,” said Stone. “The play seesawed back-and-forth in the second set until the Pioneer pair pulled ahead.”

“It’s always special on Senior Day to recognize the contributions of the seniors and the support of their parents,” said Stone. “It’s extra special to get a win on that day as well. There was a good crowd on hand, and the team responded on the courts.”

The Pioneers earned a thrilling 3-2 victory over North Reading on May 18.

Gioioso cruised past her third singles counterpart in straight sets, 6-0, 6-0.

“Anna and Geena led their matches from the beginning to the end,” said Stone.

Grava and Sieve lost their first doubles match in three sets. After winning the first set 6-4, Grava and Sieve dropped the second set 2-6 and fell 1-6 during the third set.

Breslow and Marafon lost their second doubles in two sets, 4-6, 0-6.

With the match tied 2-2, Martino was able to secure the Pioneer victory after defeating first singles counterpart Elizabeth Grant in two sets, 6-4, 6-4.

“Both Paige and Elizabeth battled game-for-game throughout both sets, with neither seeming to gain an advantage until the final few games of each set where Paige played her best tennis at crunch time,” said Stone. “It was also a battle of styles, as Paige hit topspin groundstrokes and Elizabeth mixed both topspin and slice. It was an enjoyable match to watch as a spectator, but as a competitor, it was mentally and physically exhausting.”

Stone recalled that the Pioneers stung the Hornets 3-2 on April 28.

“The rematch repeated itself,” said Stone. “The result was similar as the first time we met this season, except the drama was heightened as the match was tied at 2-2 with first singles still on the court to decide the outcome. It was great for the players’ confidence as we move forward toward the tournament.”

The Pioneers began last week falling 5-0 to Hamilton-Wenham on May 16.

The match featured two teams that are currently in the top five of the MIAA’s Division 4 Power Rankings, with the Generals ranked first and the Pioneers being ranked fourth. Stone said the girls’ tennis team was moved from Division 3 to Division 4 this year due to the MIAA changing its state tournament format.

“Hamilton-Wenham is 15-0, and they showed why they are the sitting on top of the MIAA Division 4 Power Rankings,” said Stone. “The match was played indoors at the Manchester Athletic Club, as Hamilton-Wenham does not have home courts at this time. We had trouble finishing points, and we could not capitalize on the deuce games. However, the potential is there and should we meet again in the Division 4 tournament on outdoor courts, the match could be quite different.”

The Pioneers travel to Marblehead on Wednesday, May 25, beginning at 3:30 p.m.