Gallagher states his case in the 600 meter run 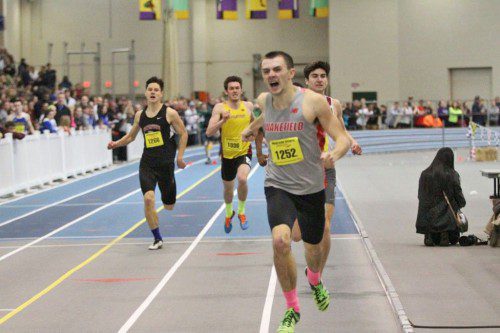 JACKSON GALLAGHER, a senior, came in second overall in the 600 meter run in a time of 1:20.85 in the All-State meet which was held Saturday at the Reggie Lewis Track and Athletic Center. Gallagher will be competing in the New England championships on Friday night at the Lewis Center.

BOSTON — It was a very big day for Warrior track and field standout and Middlesex League MVP Jackson Gallagher this past Saturday at the Reggie Lewis Track and Athletic Center in Boston.

Gallagher came up with a jaw dropping performance at the All-State meet, placing second in the 600 meter run. Gallagher placed behind U.S. #2 ranked St. John’s Prep standout and Harvard bound Joe Luongo. Luongo broke the meet record with a time of 1:19.36.

Gallagher ran another huge personal best of 1:20.85, almost a full second faster than his school record breaking performance from last week in the Div. 4 meet. His time is the third fastest time at an All-State meet since 2008 behind Luongo and the previous state record holder Andre Rolim of Somerville. He has broken or bettered the WMHS school record five times since his sophomore year.

The time is the seventh fastest time in the U.S. this year and it qualified him for the championship 400 meters at New Balance Nationals on March 14. His second place finish also qualifies him for New England Championships which will be held this Friday at 4:30 p.m. at the Lewis Center.

According to assistant coach Perry Pappas, Gallagher ran a courageous race against the deepest 600 meter field Massachusetts has ever seen. It was the culmination of hard work and focus over the past few years. Pappas feels UMass Lowell is very lucky to get such a special athlete since Gallagher will be attending the Div. 1 college in the fall.

Ben Joly, a senior, had a great performance in the shot put as he placed 13th overall with a throw of 47-3 1/2. It is the best season a Warrior shot putter has enjoyed in many years.