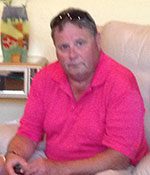 WAKEFIELD — Gary E. Harrington, 62, of Wakefield died on Thursday, May 25, in Dover, Vermont.

Born in Medford on December 12, 1954, he was the son of Shirley (Sullivan) Harrington of Wakefield and the late Walter Harrington.

Gary was a graduate of Austin Prep School, Class of 1972, Fitchburg State College and Western New England College, where he received his master’s degree in Finance. He had retired from Raytheon as a proposal specialist.

Gary was a numismatic, an avid golfer and skier, enjoyed traveling and loved his cats.

His funeral mass will be celebrated in the Most Blessed Sacrament Church, 1155 Main St., Wakefield on Thursday at 10 a.m., followed by an interment at Lakeside Cemetery in Wakefield.

Visitation for relatives and friends will be held at the McDonald Funeral Home, 19 Yale Ave., Wakefield on Wednesday from 5 p.m. to 8 p.m.