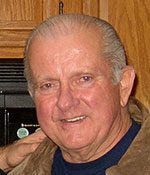 WAKEFIELD — Joseph Edward Gaudet, 81, of Wakefield and Florida, died Monday, May 29, at the Kaplan Family Hospice House in Danvers.

Born in Malden on December 17, 1935, he was the son of the late Edward Joseph and Eva (Garneau) Gaudet.

Mr. Gaudet was raised in Malden and was a graduate of Malden High School and later received an associate’s degree in Accounting from Burdett College in Boston.

Following his education, he served in the Massachusetts National Guard for a few years. He worked for the Union Local 7 as an iron worker and foreman and was part of many of the building projects in Boston, including the Tobin Bridge and the John Hancock Building. He loved to build and even built two of his family homes.

He was a member of St. Florence Church and was a 16 year resident of Leesburg, Florida following the passing of his wife.

He was the husband of the late Barbara Ann (D’Agostino) Gaudet. He was the father of Lisa D. DeLuca and her husband John of Dracut and Glenn S. Gaudet of Arlington. He was the brother of Daniel Gaudet of Saugus and the late Marie, George, and William Gaudet. He was the grandfather of Shauna Marchand and her husband Justin of Chester, NH, Marisa DeLuca and her fiancé Anthony DiMarzo of Dracut and Arianna DeLuca of Dracut. He is also survived by three great grandchildren: Mia, Rilynne, and Anthony.

Visitation for relatives and friends at the funeral home on Wednesday from 4 p.m. to 8 p.m.