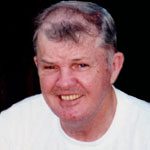 Born in Wilmington on Feb. 11, 1937, he was the son of the late Malcolm and Ann (Connors) Gillis. He was raised and attended school in Wilmington. He was a U.S. Navy Veteran.

George had great enthusiasm for life and a remarkable ability to make and retain friends for life. He had a great sense of humor, he was always smiling and was good to everyone. He was known as the Lollipop Man at all of the Men’s Softball League games and was a dedicated fan. He loved going to morning coffee with his friends. His grandchildren and great-grandchildren meant the world to him, along with his many nieces and nephews.

George loved going to Sebago Lake, he enjoyed camping, fishing and being with his family. He was a true Red Sox and Patriot fan. He loved playing cards and always joked around with everyone. George especially loved his dogs, Lilly and Jake.

He was the beloved husband of 56 years to Dorothy (Sarcone) Gillis, he was the loving father of his son, George F. Gillis Jr. and his fiancé Wendy O’Brien of Tewksbury; daughters, Debra McCabe and her husband Carl and Kathleen Anderson and her husband Peter, all of North Reading and Dorothy Welch and her husband William of Denver, Colo.; he was the brother of Edward Gillis and his wife Kay of Wilmington, Richard Gillis and his wife Joyce of Lexington and Eleanor Cameron and her husband William of Wilmington; he was the brother of the late Buddy, John and Mary Gillis; cherished grandfather of 10: Kaitlynne, Nicole, Kristopher, Scott, Kayla, Kaulin, Samantha, Kristina, Kyle and Kerrianne; and the great–grandfather of six, Isabella, Olyvia, Alexis, Chase, Trent and Loralye. Also survived by many nieces and nephews.