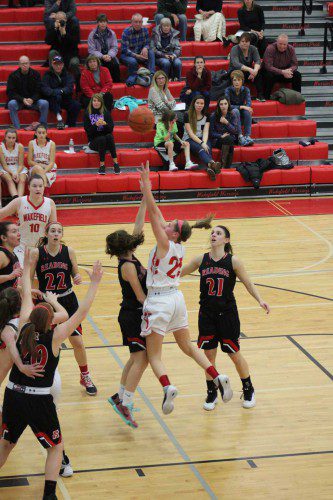 ALLEE PURCELL, a junior (#25), scored 15 points for the Warriors and was the game high scorer in Wakefield’s 43-40 triumph over Reading last night at the Charbonneau Field House. (Keith Curtis Photo)

WAKEFIELD — Fresh off a win in the opener versus Lexington on Friday, the Wakefield Memorial High School varsity girls’ basketball started the season 2-0 with a 43-40 win over Reading last night at the Charbonneau Field House.

The Warriors had a tough time offensively, starting the game 0-for-7 from the field and eventually scoring only four points in the first quarter. However, they came ready to play on the defensive end. Scoring was equally hard for Reading, as the home team allowed its opponent to total just eight points.

Haley Lovell and Brianna Smith had the only baskets for the Warriors in the first quarter.

Forward Allee Purcell was the difference maker for the Warriors. The junior really turned up the level of play in the second quarter, scoring 10 of the team’s 18 points in the frame. She was a monster rebounding under the boards on both ends, picking up second chance points on the offensive glass several times throughout the second quarter. She finished the game with 15 points and 18 rebounds.

Purcell had five of the six points for Wakefield and she grabbed many of her rebounds off of all the missed shots in the third quarter by either team. The quarter ended with Wakefield’s lead cut down to just three at 28-25.

Reading went on an 8-0 run from the end of the third quarter through the first couple of minutes in the fourth quarter and jumped out to a five point lead before Hannah Butler was able to get two up on the board.

Olivia Dziadyk had a very strong outing in the first game and she is expected to be a big part of the Warriors’ offense this season. But she struggled from the field against Reading, making just a lone free-throw before the fourth quarter. She seemed to have no problem finding good looks, sometimes the shots just don’t go down. That didn’t discourage Dziadyk and she kept shooting in the fourth quarter and they started falling. The junior guard was able to hit five shots from the field in the fourth, including a three-pointer, for a tally of 11 of the Warriors’ 15 points in the frame.

With the teams trading baskets late in the fourth quarter, Dziadyk had a huge play in the paint, taking a foul and dampening the hopes of the Rockets when the shot went down. She didn’t convert on the free-throw, however, that would have put the Warriors up by four.

Reading called for a timeout to set up a play, but the Warriors defended it perfectly without fouling and came out with the win 43-40.

“The Middlesex League is a tough league to play in,” she said following the win. “We were going up against an athletic, tough Reading opponent.”

Now 2-0 at home, the Warriors will have to defend their unbeaten record on the road next time out.

Even though they got off to a slow start scoring the ball, Coach O’Connell wasn’t discouraged.

“The message on the bench was just relax. It seemed like we made a few mistakes, we just needed to relax and play our game.”

Despite the shortcomings of the offense, the Warriors played hard at the defensive end all four quarters.

“Everything starts with defense, I’m just so proud of how they gutted it out. Our defense kept us in the game early, I really believe if you stick with your defense and rebound, good things are going to happen,” the coach said. “We felt like we were getting good shots, so we knew they would fall. All you can do is keep taking good shots and they’re going to fall.”

The key for the Warriors was keeping the ball out of the hands of Reading’s most potent threat, “Their leading scorer from Friday night #20 (Kathryn Nestor), we really tried to keep the ball out of her hands in the first half.”

The Rockets couldn’t find Nestor out there as she was blanketed by the Warrior defense. The Warriors held Reading’s top player scoreless in the contest.

“(In the) Second half we went with a more traditional 2-3 zone. We wanted to prevent the drives. They’re a really good driving team and give them credit, they knocked some threes down late to get us out of it. But we were trying to prevent the dribble penetration with the zone,” explained O’Connell.

The coach knows that the work on the glass set her team apart last night.

“The rebounding was the difference in the game,” she said. “When teams are struggling you have to try to control the boards and get in some of those easy put backs. Julia Hanley did a nice job on the boards. I know Hannah Butler had a late rebound put back. Allee Purcell’s ability to grab them and go right back in was just huge for us.

“When things aren’t going your way offensively, we say you gotta stick with the little things,” continued O’Connell. “But really they’re the big things that make the difference, that’s your rebounding and your defense.”

When it came time to get into her players heads in the huddle, O’Connell shared the message she had for her team.

On Olivia Dziadyk’s fourth quarter performance the coach said, “She really gutted it out and hit some huge shots at the end for us.”

The Warriors are now 2-0 with two of their top players out injured. Coach O’Connell didn’t mention a time frame for when Emma Butler and Allyson Coggswell might return, but she is certainly looking forward to being at full strength.

“We’re 11 strong,” she said. “We miss our two that are injured but the team is stepping up big with nine while they’re out. We’re excited to be getting them back because we’re at our best when we have all 11 players healthy.”

The Warriors will be at Arlington on Thursday with tipoff set for 6 p.m.