Take care of Burlington, one more victory away from outright claim

WAKEFIELD — The Drive for Five is nearly complete for the Warrior girls’ cross country team.

Wakefield clinched at least a share of its fifth straight Middlesex League Freedom division as it took command of its home course beating Burlington, 15-48, yesterday afternoon at the Beasley Track and Field Course.

The Warriors are now 4-1 overall and 4-0 in the league. If Wakefield beats Watertown, then it will wrap its fifth M.L. Freedom division in a row.

Jordan Stackhouse, a junior, started it off with her first outright victory on the home course. She ran a personal best of 20:32. She looked fantastic the whole race said Coach Karen Barrett. 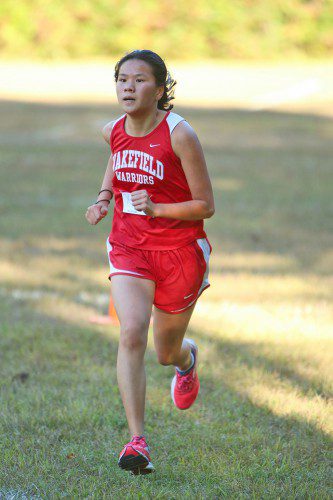 Freshman Amanda Westlake was third with a personal best time of 21:25.

“She (Westlake) is really impressing me every week,” said Barrett.

Gillian Russell and Abby Harrington, a sophomore and junior. were fourth and fifth. They posted times of 21:28 and 21:29.

Senior Reilly McNamara ran a much improved race finishing in eighth place with a 22:36.

Isabella Kehoe ran a 22:50 improving her time by almost a minute. Catherine Urbano was next with a 24:15, while Kate Lynch improved her time by over two minutes running a 24:18.

Freshman Nicole Lima improved her time by over three minutes running a 27:38.

“I was really happy with the girls effort today. They ran hard and most of them showed improvement,” said Barrett. “We are going to be working really hard this week to face Watertown on our home course next Tuesday. This will be for the outright fifth championship in a row. We have the talent. I believe in my girls. If they keep working hard I am hopeful we will achieve our goal as a team. I am very proud of what they have accomplished so far.”

Wakefield hosts Watertown next Tuesday at 3:30 p.m. at Beasley.