Girl skaters put up a fight against Burlington

Warriors turn in a spirited effort in 5-3 setback 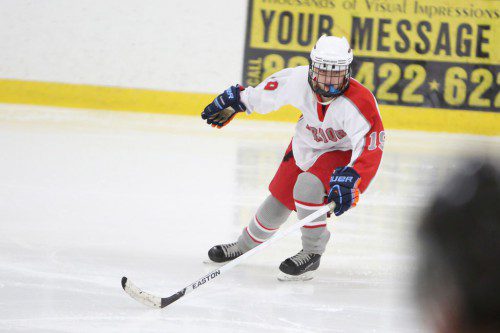 BROOKE LILLEY, an eighth grade forward, scored a goal and assisted on another in Wakefield’s 5-3 loss against Burlington last night at the Ice Palace. The Warriors fell to 0-7-2 on the season. (Donna Larsson File Photo)

BURLINGTON — The Wakefield Memorial High girls’ hockey team traveled to Burlington last night and took on a talented Red Devils squad and, despite a valiant effort, left with a 5-3 loss at the Ice Palace.
Freshman Kat Nikolopoulos accounted for four of Burlington’s goals with another freshman, Kelly Browne, notching the fifth goal.
“They have a couple of very good forwards. Number 3 (Browne) is a very good player and we knew that coming in,” noted Wakefield coach Jack Foley.
As has often been the case this season the young Wakefield found itself turning the puck over in their own end and, if not for fine work in net by Miriam Wood, it could likely have meant disaster for Wakefield.
“Once again, Miriam played a solid game in net,” Foley added.
After Julia Swarbrick, Kenzie Arsenault and Nikolopoulos took shots on Wood, Wakefield had its own scoring chances with Brooke Lilley, Meghan Guarino and Julianne Bourque putting shots on Burlington goalie Cassidy Smith but to no avail.
Though Burlington vastly outshot Wakefield in the period it was the visiting team that took the lead when Bourque scored off a nice centering pass from Olivia Cameron just before the end of the period to send Wakefield into intermission leading 1-0.
It didn’t take long into the second period for Burlington to tie the game, however. Nikolopoulos picked up her first goal of the game to tie it at 1-1.
She scored again with 2:51 remaining on the clock and then with just under a minute left in the period to make it 3-1. The last goal came after an icing call that put the face off in the Wakefield end, a call that had Foley discussing the call with the official and was also accompanied by some jeers from the Wakefield fans who didn’t agree with the call.
“I’m very happy with the effort put it in today. Again, we made mistakes in our end in the second period, especially (with) those two goals around the net. We’ve got to do better and not give the puck away. We did a better job on the offensive end but we’ve got to do a better job in our end to keep ourselves in the game,” said Foley.
Burlington came out strong in the third period but again Wood was able to fend the Red Devils off for a while. Browne made a nice move to decoy Wood and then go to her glove-side for a backhander to put Burlington up 4-1.
A few minutes later Browne combined with Nikolopoulos for a 2-on-0 goal with Nikolopoulos taking Browne’s feed and burying it to make it 5-1.
Down but not out, Wakefield rallied for two goals coming from the sticks of Lilley and Bourque. Megan Horrigan assisted on Lilley’s goal while Lilley and Courtney Hill got the assists on Bourque’s goal to put the score at 5-3, where it would stand.
—–
At Ice Palace, Burlington
WAKEFIELD………1 0 2 — 3
Burlington…………0 3 2 — 5
—–
First Period — Wak, Bourque (Cameron) 14:10. Penalties — None.
Second Period — Bur, Nikolopoulos (Browne) 3:00. Bur, Nikolopoulos (Gaffney, Arensault) 12:09. Bur, Nikolopoulos (Brown, Swarbuck) 14:07. Penalties — Bur, Browne (interference) 10:00.
Third Period — Bur, Browne (Nikolopoulos) 4:56. Bur, Nikolopoulos (Browne) 7:49. Wak, Lilley (Horrigan)10:08. Wak, Bourque (Lilley, Hill) 10:50. Penalties — None.
Shots on Goal — Wakefield 25. Burlington 39.
Power Plays — Wakefield 0 for 1. Burlington 0 for 0.
Goalies — Wak, Wood (39 shots-34 saves). Bur, Smith (25-22).