Numbers add up to a win for the WMHS grapplers

Warriors hold off Burlington for 40-36 victory 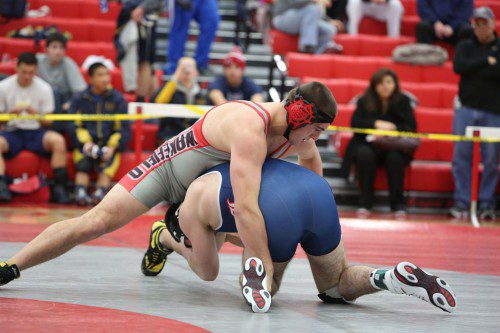 DAN WENSLEY, a senior captain (left), moved up to the 285 weight class to wrestle last night against Burlington. Wensley pinned John Luminello at 44 seconds for six points as the Warriors went on to win, 40-36, at the Charbonneau Field House.
(Donna Larsson File Photo)

WAKEFIELD — Even though it is always important to compete well in a wrestling dual meet, sometimes it just helps having the numbers to fill all the weight classes.

The Wakefield Memorial High wrestling team did both as it fended off Burlington, 40-36, in a Middlesex League Freedom division clash last night at the Charbonneau Field House.

The Warriors increased their overall record to 9-4 on the season and are 3-0 against Middlesex League opponents and 2-0 against teams in the Freedom division.

Wakefield benefited from five forfeits as the Red Devils didn’t fill all the weight classes due to lack of personnel and not wanting to take on some of the Warriors’ top wrestlers. Still, Wakefield competed well in several of the matches and built up enough points to win after the Red Devils made their run in the lighter weight classes where several of their stronger grapplers compete.

“It was a numbers game. We were able to fill all 14 weight classes,” said Head Coach Ross Ickes. “It was unfortunate some of our guys didn’t get to compete. We got the win but we won tonight because of the numbers.”

There was some good competition on the mats, too, beginning with the 152 bout. At 152, junior Evan Gourville faced Brendan Fair. Gourville won by major decision, 9-0, to give Wakefield four points to start the meet. Gourville had a 2-0 lead after the first period but had a strong point scoring second period as he opened up an 8-0 advantage. He added one more point in the third for an impressive victory.

“Gourville’s major decision at 152 got us started,” said Ickes. “He had his best match of the season cutting down to 152. That was big thing for us and probably was the difference.”

The Warriors accepted forfeits at the 170, 182 and 195 weight classes to open up a 22-6 advantage. Senior tri-captain Ryan Cunningham, senior Matt Yirrell and senior David Piracini were awarded the victories at the three contests.

Alex Kane, a senior tri-captain, was pitted against Brad Bashin at 220. Kane was edged by a close 2-1 decision. The score was 0-0 after one period and 1-0 in favor of Kane after two periods. But Bashin earned two points in the final two minutes and that was the difference in the contest.

Senior tri-captain Dan Wensley moved up to wrestle at 285 and he took down John Luminello at 44 seconds of the first period for six more Warrior points. Wakefield led 28-9 at the time.

Burlington won the next two weight classes by fall to close the gap to 34-21.

At 113, junior Shannon Drager was pinned by Kevin Nigro at 53 seconds.

Jake Goodchild, a freshman, accepted a forfeit at 126 for Wakefield’s final six points of the meet. That gave the Warriors a 40-21 lead. The Warriors also benefited as one of Burlington’s top wrestlers, Tom Lee, was unable to compete at 126.

“They were without one of their best wrestlers, Tom Lee,” said Ickes. “I hadn’t counted on that.”

The Red Devils made their run after that scoring the final 15 points of the meet and winning two matches by pin in the process.

Connor Shine, a senior, stayed off his back and that proved to be a good thing for Wakefield otherwise the final score would have been even closer than the four points. Shine was edged by a 5-4 decision against Eric Flynn in the 132 bout. The two wrestlers were tied 2-2 after the first and Shine trailed 3-2 after the second period. Shine battled in the third to try to make up that point but was unable to do so.

At 138, freshman Ryan Smith was pinned in about half a minute by Jack Becker.

Ben Piercy, a sophomore, took on Ed Stanton in the final match at 145. Piercy lost by pin at 15 seconds to conclude the meet as Wakefield held on for the win.

Wakefield hosts a quad-meet on Saturday morning starting at 9 a.m. at the Charbonneau Field House. The Warriors will wrestle against Reading, Greater Lawrence and Shawsheen Tech.