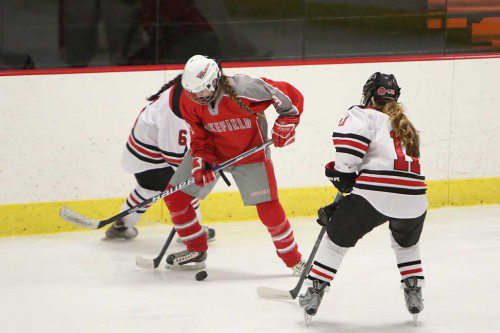 MEGAN HORRIGAN, a senior defenseman, is one of Wakefield’s captains and the Warriors will be relying on her leadership along with the rest of the upperclassmen this season.
(Donna Larsson File Photo)

WAKEFIELD — The Wakefield Memorial High girls’ hockey team is beginning a new era with a new head coach and the Warriors are hoping that it will be a successful one.

There is a long way to go for Wakefield to return the prominence of nearly a decade ago as it finished with a 3-17-0 overall record and 2-14-0 mark in the Middlesex League Freedom division.

Jason Lawrence takes over the program after Jack Foley stepped down after coaching the Warriors for 17 years as a head coach and an assistant. Lawrence is a teacher at the Galvin Middle School.

Lawrence was the head coach for the Everett High boys’ hockey team and is the skills and power skating coach for Elite Skills Hockey and Coach of Boston Junior Bruins program.

Lawrence is currently getting familiar the players on the team and their skills.

“(I have) A little familiarity with a few players but have been very impressed with the character and work ethic that I have seen so far,” said Lawrence. “We have different players competing for starting spots. It should be very competitive.”

Wakefield graduated three seniors from last year’s squad. Julianne Bourque and Meaghan Kerrigan were forwards and Gabrielle Nadolny was on defense. But the rest of last year’s team were underclassmen and the majority of them are back.

The rest of the seniors on the roster are Mary Callahan (forward), Jackie MacDonald (forward) and Abby Chapman (goalie). All are returning players except for Chapman who is new to the team.

There are six juniors on this year’s team and all are returning players. They are Hill, Vanessa Kaddaras (forward), Mikayla Fennelly (defense), Caroline Sweeney (forward), Olivia Cameron (forward) and Sophia Barrett (defense).

Also returning are sophomores Brooke Lilley at forward and Lydia Rascher in goal.

There were also many underclassmen on the roster a year ago as well. One of those players, goalie Cailyn Wesley, has transferred leaving a void in goal.

Fiona Heffernan, Caroline Hurley and Juliette Guanci played on the varsity as freshmen a year ago. All three were forwards.

“I believe our strength is our speed and ability to pressure teams all over the ice,” said Lawrence. “We have hard working girls with a lot of character. Solid leadership from the upperclassmen will be a key to our success.”

Even though he is new the program, Lawrence is familiar with the reputation of the Middlesex League.

“It should be a very tough league with a lot of quality teams. We will need to bring our best every night,” said Lawrence. “I expect a lot of teams to be tough challenges. Reading, Arlington and Burlington are returning strong rosters.”

Wakefield is scheduled to open up the season this afternoon at 3 p.m. against St. Joseph Prep in a nonleague game at the Warrior Rink in Brighton.