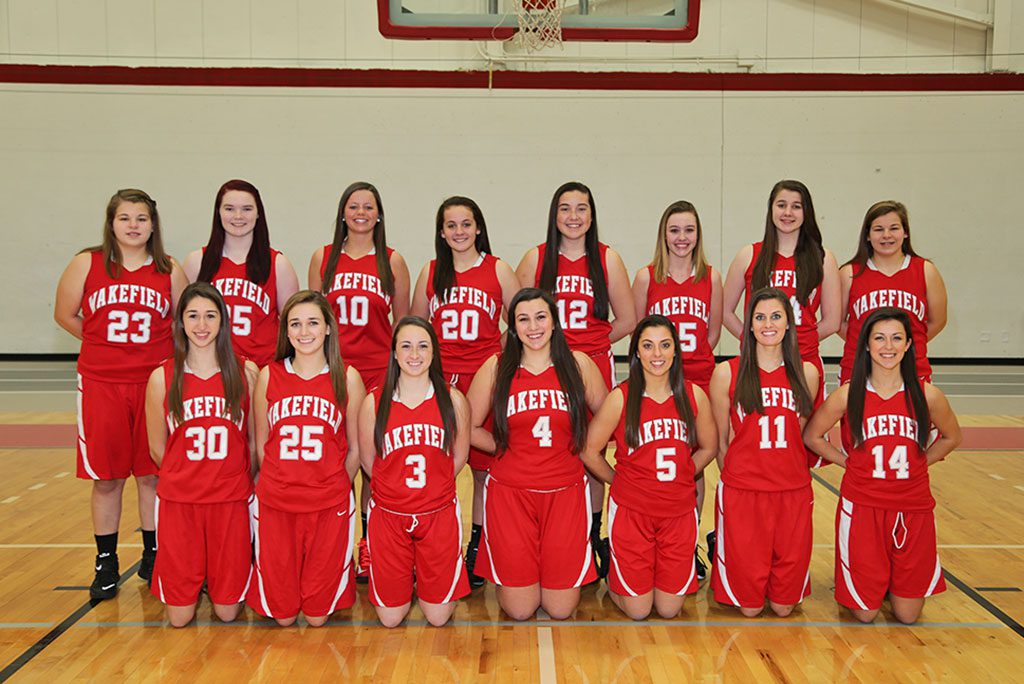 The 2014-15 installment of the Warriors was the most successful under O’Connell and in recent memory, as she led a team of seven seniors, four juniors, two sophomores and two freshmen to a 12-8 record in the regular season and earned the team a second consecutive trip to the Div. 2 North state tournament.

The overall win/loss record earned the Warriors a seventh seed in the tournament and granted them a home playoff game against Triton.

Home court proved to be key as the Warriors advanced to face a Pentucket team that had lost just one time all year.

The Sachems were poised to go on a deep tournament run as the Warriors’ run came to an end in Pentucket.

It was not before some very exciting basketball games were played and the Warriors can be proud of the way they represented their team and school.

“I felt like we were just very consistent all year,” Coach O’Connell said. “All of our losses came to tournament teams. We were really competitive and our experience really helped us.”

The season started with one of the two toughest tests Wakefield faced all year, on the road at Woburn. The Tanners were everyone’s favorite to win the Middlesex League Liberty division to start the year and for good reason. They went 19-1 overall this season starting with a win in game one against the Warriors.

Wakefield came out of the opening game 0-1 but the next time out was in the friendly confines of the Charbonneau Field House.

In Game 2 against Lexington. the Warriors picked up their first win of the year 52-48 over the Minutemen. Senior forward Daniella Iannuzzi had 20 points and senior guard Amanda Boulter had 16 points to lead the Warriors to victory.

The next game came two days before Christmas and the Warriors delivered an early gift to their fans with a 52-38 win over Reading. Senior guard Nicole Galli had perhaps her best game with 14 points and two three pointers. Boulter had 13 and Iannuzzi had 10 to lead the Warriors to a 2-1 start.

A New Year’s Eve blowout against non-league opponent Concord-Carlisle, 39-18, saw the Warriors record improve to 3-1 to close out 2014. The Warriors picked up their first road win of the year with eight points each from Iannuzzi, Boulter and Galli.

To start 2015, the Warriors had to face the consensus best team in the league, Watertown. Despite a making it hard on the Raiders, the Warriors eventually fell 53-34.

Things would turn around and head in the right direction as the Warriors won three of the first four games in ‘15, earning wins against Stoneham, Wilmington and Melrose following the loss to Watertown.

A one point loss to Burlington on Jan. 16 saw the Warriors’ three-game winning streak come to an end. In a back and forth contest, the Red Devils edged the Warriors at home, 47-46.

Wakefield didn’t have much time to review the loss or prepare for the next game, as it had to face Arlington on the road just three days later.

The Spy Ponders were too much for a weary Wakefield side taking the victory 51-43 and for the first time this season coach O’Connell’s team, lost back to back games.

Wakefield then had several days off for mid-term exams before its next game against Winchester. Wakefield managed to come up big against the Sachems and prevailed, 51-41.

After that snow wreaked havoc with the schedule with a number of postponements and it wasn’t until seven days after Winchester that the Warriors stepped on to the floor again.

This time, the Warriors welcomed undefeated Watertown to the Charbonneau Field House. The game was closer than the final score indicates as the Raiders pulled away in the fourth quarter, taking the win and sending Wakefield to their third loss in four games.

The month of February started with three straight home games as the Warriors looked to go on a run as their season had started 7-5 to that point.

Wins at home against Stoneham, Wilmington and Concord-Carlisle pushed the Warriors to 10-5 on the year and clinched them a spot in the Div. 2 North Tournament.

Wakefield’s game against Belmont was the victim of the snow-rescheduling and having been postponed twice, the game finally got played Feb. 12. It wasn’t a bountiful journey to Belmont as the Warriors suffered their worst loss of the season 51-30.

The Warriors were back at it the next night and Burlington caught them off guard as the Red Devils came in and stole one from the Warriors at home, winning by seven, 50-43.

Wakefield’s final game of the regular season was held at the Charbonneau Field House due to rescheduling conflicts in Melrose. The girls played their final regular season game as the road team in their home building.

The Warriors held off their bitter rival to the tune of a 50-42 victory. Wakefield’s defense held off a late charge by the Red Raiders and secured victory in their final Middlesex League game.

Wakefield’s 9-7 record was good enough for second in the Middlesex League Freedom division, behind only undefeated Watertown.

After Middlesex League play concluded, Coach O’Connell’s team had about a week before the Div.2 North tournament began. In the meantime, the team took part in the General Patton Tournament at Hamilton-Wenham High School.

Wakefield went 1-1 in their games in South Hamilton, dropping their first round game to Hingham, then coming back the next day to defeat host Hamilton-Wenham in the consolation round.

The tournament draw was kind to the Warriors as they earned a seventh seed and were granted a home matchup against 10th-ranked Triton in the opening round.

The Charbonneau Field House was packed with fans excited to see the Warriors hosting a postseason basketball game once again, and the Warriors did not disappoint. The home team hit their stride and vanquished the Vikings by a 55-38 final score. Iannuzzi led the Warriors to the second round of the playoffs with a 15 point performance against Triton.

Mackenzie Collins was hurt for much of her senior season but healthy once again for the playoffs, Coach O’Connell called on her number with some players going out with foul trouble early on.

Collins answered the call and contributed a five point burst in the first half to give her team some momentum.

“She came out and hit a couple big shots for us in the playoffs,” O’Connell said of Collins.

The win saw the Warriors move to the quarterfinal round where they had meeting with number two seeded Pentucket on the road.

The matchup didn’t favor the Warriors as the Sachems were led by their star player Kelsi McNamara who disposed of the Wakefield challenge by a 61-35 final score ending what was a fun run for the Warriors.

There was no shortage of quality play and exciting games this season and the Warriors can be proud of their efforts. They’ve now been to the state tournament two straight seasons.

Senior forward Daniella Iannuzzi, was one of the co-captains this season. She averaged 10 points per game and anchored the team defensively and in the low post.

“She always had to guard the other team’s best forward or center and she was always undersized but she played really strong and aggressive. She boxed out and was able to more than hold her own on the boards.”

Galli was the team’s other co-captain, a four year varsity point-guard Galli earned high praise from the coach.

“She ran the show offensively,” O’Connell said. “She is a real strong leader and in key moments she came up with big momentum changing plays.”

Jillian Raso was the fourth senior to start for the Warriors and her length and athleticism allowed her to have an impact on both sides of the ball.

Julia Filippone, Alyssa Rossino and Collins all played limited roles for the Warriors off the bench in their senior seasons.

“Mackenzie did a nice spot for us at the guard position after coming back from injury, Alyssa Rossino came in and filled the backup guard roll nicely and had a key layup against Melrose. Julia Filippone had an injury early on as well but when she came back we could count on her to make that shot as well. She was so strong defensively for us that we would typically play her on the opposing team’s best scorer whether she was a guard or a forward. Jill had the versatility to guard either position.”

Boulter and Iannuzzi were the leading point scorers for the Warriors but the thing that made this a successful team was its depth. Third place in team scoring came down to a four-way tie with Raso, Gabby Joly, Grace Hurley and Galli averaging five points per game. Each of these players scored in double figures in at least one game and, in most cases, more than once throughout the season.

As a team Wakefield stood out defensively more than anything. When the Warriors were at their best, opposing teams had a hard time finding ways to score. The defensive activity was impressive to watch when the Warriors were in shut-down mode. They had a knack for stealing passes and applying pressure to the ball handler.

When teams struggled to score, Wakefield’s rebounding often gave it an edge. The Warriors were tenacious going for rebounds on the offensive glass but holding teams to one shot on the defensive side of the ball by securing defensive rebounds helped earn Wakefield its wins.

“I think everything starts with defense and rebounding,” O’Connell said. “There were several nights where the opposing team’s leading scorer didn’t hit their average. I know that’s something they were proud of.”

Wakefield’s senior leadership and experience no doubt aided its ability to come back from disappointment and get things back on the right track, only losing consecutive games twice.

“You can’t replace experience,” O’Connell said. “We had really strong leadership. They were selfless and had great attitudes. They really just cared about being the best team we could possibly be. They gave everything they had and they had a fun attitude to go along with it.”

With seven players graduating, Wakefield will have some big shoes to fill. However, the future is shining brightly for the Warriors as the team featured two sophomores and two freshmen, while the JV team lead by long time boys’ freshman head coach Fred Marshall only lost two times by a basket or less each time and Coach Rick Quattrocchi’s freshman girls’ team lost just one game.

Next year, the team will be led by captains Gabrielle Joly and Grace Hurley in their senior season as they look to get back to the playoffs for the third consecutive winter.