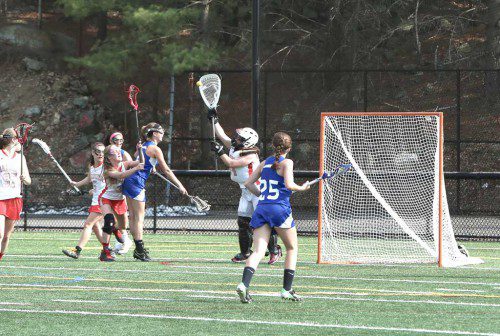 JUNIOR GOALIE Mikayla White (second from right) puts her stick up to make a save during yesterday’s game against Georgetown as Kelsey Czarnota (#3) makes contact with a Royals player. Czarnota scored eight goals and had two assists in Wakefield’s 22-14 triumph. Also defending on the play were Madison Guay (#37) and Gianna Tringale (#5). (Donna Larsson Photo)

WAKEFIELD — The Warrior girls’ lacrosse team scored eight goals in the first 13 minutes of yesterday’s non-league game against Georgetown. The game was pretty even the rest of the way as Wakefield pulled out a 22-14 triumph at Landrigan Field.

The win came after the Warriors lost to Winchester by a 17-6 score on Friday afternoon at Knowlton Stadium.

Wakefield is now 7-5 overall on the season and 2-5 in the Middlesex League Freedom division. All five of Wakefield’s defeats have come in league competition. The Warriors have won all five of their non-league contests including a pair over the Royals.

Wakefield’s offense was on full display against the Royals as Wakefield took a 12-5 halftime lead and poured in 10 more goals in the second half. Leading the way was sophomore Kelsey Czarnota as the center tallied eight goals and assisted on two others.

Julianne Bourque, a junior, had a big day herself as she scored four goals and earned an assist.

Finding the back of the net three times was sophomore Brianna Smith.

Georgetown called a timeout after the eighth Warrior goal to settle things down and the game was more even the rest of the way. But that eight goal margin proved to be the difference.

With Wakefield in front by 10 goals, by rule the clock continues to run in girls’ lacrosse as long the lead is 10 goals or more.

Conte scored for Georgetown at 11:45 and then the Royals tallied three straight goals at 8:25, 7:05 and 3:29 to cut the lead to 19-11. That resulted in no more running time as the clock stopped again with the deficit being less than 10 goals.

“We beat them 17-11 the first time we played, so it was the same kind of game,” said Luca. “We want to get a win against Belmont, a Tier 1 (M.L. Liberty division) team on Wednesday. We want to get wins in our next two games to get into the tournament.”

Against Winchester on Friday, the Warriors trailed 6-2 at halftime. But they were outscored 11-4 in the second half as the Sachems ran away with the victory.

White made eight saves in goal for the Warriors.