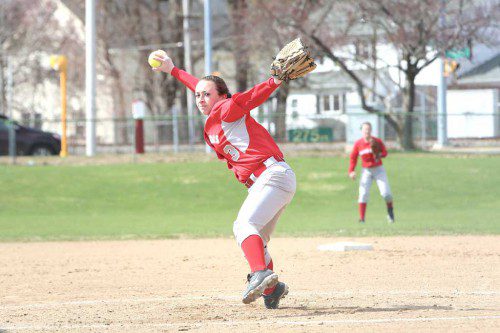 AMANDA BOULTER, a senior right-hander, pitched two innings and earned a save in Wakefield’s 10-6 victory over Belmont. Boulter also had two hits, scored a run and knocked in a run. (Donna Larsson File Photo)

The record puts the Warriors record at 9-3, leaving them one victory short of qualifying for the state tournament.

“Boulter’s done that in the past. I was trying to save her but my little freshman was running out of gas. I can put Boulter in those situations and she’s come through for me. She’s having an outstanding year,” praised Wakefield coach Rick “Coach Q.” Quattrocchi.

The win was Burnett’s second win and Boulter is credited with a save.

The team got a bit of a scare when third baseman Emma Kraus left the game after being shaken up when she was the recipient of a hard tag. Kraus was OK but “Coach Q.” praised Belmont for its concern with the condition of Kraus.

“I thought the Belmont team, showed a lot of class. About three or four of their players came over to me when the inning was over to me and they asked to see if the girl was OK. I thought they were a very classy team and usually you don’t see that and they handle themselves very well.”

The team will host Watertown at home Wednesday with Alexi Truesdale the projected starting pitcher, with Boulter facing Stoneham on Friday night.

“That Belmont team is a very scrappy and I thought they’re much improved from years past. We hit the ball very well,” noted the coach.

Leading the way was Kraus and Nicole Gasdia with three hits apiece. Kraus scored two runs, stole a base and drove in two runs. She also had a double. Gasdia, who also had a double, scored a run and knocked in a run.

Burnett, Boulter, Truesdale and Hayley Kaddaras each had two hits. Burnett and Truesdale each hit a double and Kaddaras clubbed a triple.

Truesdale drove three runs as well while Boulter, Hannah Dziadyk and Olivia Dziadyk each had one RBI.