Girls’ lacrosse team gets it half right against Woburn 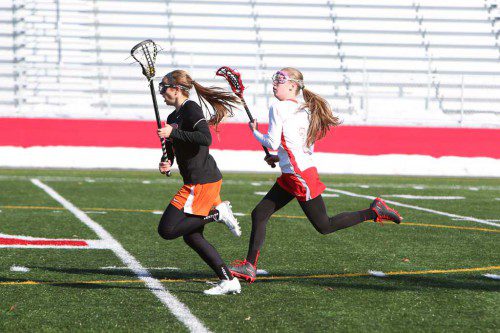 KELSEY CZARNOTA, a sophomore attacker (right), scored a team high five goals for the Warriors in their season opener against Woburn. Wakefield had a big second half comeback but came up short by a 13-9 score at Landrigan Field.
(Donna Larsson Photo)

WAKEFIELD — It can be safely be said that the Wakefield Memorial High girls’ lacrosse team wasn’t half bad in its season opener against Woburn.

However it was the first half of play when Wakefield spotted the Tanners a seven goal lead that wound up being the difference in a 13-9 setback for the home team at Landrigan Field.

Woburn, which tied Marblehead on Tuesday, came out firing on all cylinders as it took a 9-2 halftime lead. After the Tanners scored two goals to start the second half, Wakefield outplayed the visitors the rest of the way as it made a big comeback to make things interesting in the final minute.

But the halftime deficit proved to be too large for the Warriors to overcome as they fell to 0-1 on the year.

“We came out weak and slow to start the game,” said Head Coach Cara Luca. “We played a much better second half but just ran out of time.”

Luca didn’t think that Woburn having already played a regular season contest made too much of a difference in the first half.

“We scrimmaged Austin Prep and Malden,” said Luca. “We’ve practiced. Offensively and defensively we didn’t play well. We needed to pick up their cutter better than we did. In the second half we doubled teamed the cutter. We also cut to the ball better in transition in the second half.”

Wakefield ended the run as Czarnota ripped a shot that beat Woburn goalie Marissa Gregory at 1:03.

But Woburn scored two goals in the last minute to extend its advantage to 9-2 at the break. Nicole Pacheco and Emily Carpenter scored goals at 53.7 seconds and 33.1 seconds.

Junior goalie Mikayla White made the start in goal and made five saves in the first half of play as the Tanners kept the ball down Wakefield’s end most of the first half.

Junior Bianca Passacantilli took over in goal to start the second half for the Warriors. It didn’t make much of a difference as Pacheco and McCall scored within the first two minutes to give the Tanners an 11-2 lead.

But as the half wore on, Wakefield made some stops on defense. Juniors Isa Cusack, Meaghan Kerrigan and Cathy Francis led the way in the Warrior end denying the Tanners the scoring chances they had in the first half. When a shot was taken, Passacantilli made the save. She had seven saves total in the half.

The Warriors then tallied the final five goals of the game to make the Tanners a little nervous.

Vinciguerra ripped off a shot at 15:27. Czarnota then blasted three shots by Gregory at 13:36, 4:40, and 2:01. Vinciguerra tailled the final Wakefield goal with a minute left but the Warriors were unable find the back of the net again.

“We need to play better but this was our first game,” said Luca. “We have Bedford tomorrow (Thursday) and then practice on Friday. We need to work on a few things before we play Peabody on Monday.”

The Warriors travel to Bedford High School this afternoon for a 3:45 p.m. before hosting Peabody on Monday afternoon at 4 p.m. at Landrigan Field.