Warriors take on Woburn tomorrow in a Div. 1 North first round game 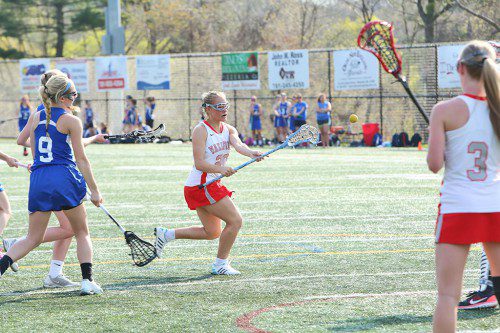 WOBURN — For the third time in Wakefield Memorial High girls’ lacrosse history, the Warriors have clinched a state tournament berth. Also for the third time, Wakefield will be playing a team from the Middlesex League in the first round.

The difference this time is that the Warriors don’t have to face Winchester. Instead, Wakefield will face M.L. rival Woburn in a Div. 1 North first round game tomorrow afternoon at 4 p.m. at Woburn High School.

The Warriors previous two tourney appearances in 2003 and 2012 resulted in first round match-ups against M.L. juggernaut Winchester. Both times Wakefield lost as it still seeks its first state tournament win ever.

To do so, the Warriors must defeat a Woburn team they lost to by a 13-9 score in the season opener on April 1 at Landrigan Field.

It was the first half of play when Wakefield spotted the Tanners a seven goal lead that wound up being the difference in that 13-9 setback for the home team.

Woburn, which tied Marblehead in its opener prior to facing the Warriors, came out firing on all cylinders as it took a 9-2 halftime lead. After the Tanners scored two goals to start the second half, Wakefield outplayed the visitors the rest of the way as it made a big comeback to make things interesting in the final minute.

But the halftime deficit proved to be too large for the Warriors to overcome. Wakefield and head coach Cara Luca will be looking for a complete 50 minute effort tomorrow afternoon.

Offensively in that game on April 1, the Warriors were led by sophomore Kelsey Czarnota who netted a team high five goals. Junior Jessica Vinciguerra had two goals an assist, while junior Julianne Bourque and senior captain Gabby Raffaele scored a goal apiece.

Woburn jumped out to a 9-2 halftime lead. Junior goalie Mikayla White made the start in goal and made five saves in the first half of play as the Tanners kept the ball down Wakefield’s end most of the first half.

Junior Bianca Passacantilli took over in goal to start the second half for the Warriors. It didn’t make much of a difference as Pacheco and McCall scored within the first two minutes to give the Tanners an 11-2 lead.

But as the half wore on, Wakefield made some stops on defense. Juniors Isa Cusack, Meaghan Kerrigan and Cathy Francis led the way in the Warrior end denying the Tanners the scoring chances they had in the first half. When a shot was taken, Passacantilli made the save. She had seven saves total in the half.

Woburn extended its lead to 13-4 before the Warriors tallied the final five goals of the game beating Woburn goalie Marissa Gregory with five shots to make the Tanners sweat it out a bit. But in the end, Woburn hung on for the victory.

However both teams have improved immensely from that meeting and the match-up promises to be a good one.

Should Wakefield win, then it advances to a quarterfinal game on Thursday, June 4. The Warriors will face the winner of first round game this afternoon between third-ranked Masconomet (13-4-1) and 14th-seeded Peabody (8-8).

Also in the Div. 1 North field from the M.L. are Winchester and Reading.

Winchester (11-7) is seeded seventh and will take on 10th-ranked Haverhill (14-6) tomorrow at 4 p.m. in a first round game at Knowlton Stadium. The winner will face second-seeded North Andover (15-5) on Thursday in a quarterfinal match-up in North Andover.

Reading (10-10) is ranked eighth and will take on ninth-seeded Chelmsford (10-8) today at 4 p.m. in a first round game at the Parker Middle School. The winner will take on top-ranked Billerica in a quarterfinal matchup on a day and time to be announced.

The dates of the semifinal and final rounds are yet to be announced.

There are several other Middlesex League teams that in the state tournament.

Melrose (8-8-1) is seeded 10th in the 14-team Div. 2 North field. Melrose will face seventh-seeded Pentucket tomorrow in a first round game at 4 p.m. at the Pentucket Middle School field.

Like Div. 1 North, the exact details of the quarterfinal, semifinal and final rounds in the other sectional tourneys will be announced.