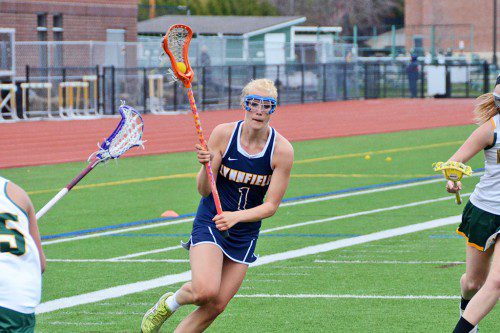 The Pioneers defeated archrival North Reading 9-6 on May 1.

Lynnfield jumped out to a 5-1 lead at halftime. The Hornets regrouped during the second half and cut the locals’ lead to one, 6-5, 10 minutes into the second half.

The Pioneers maintained their composure and scored four goals down the stretch to secure the 9-6 victory.

“It was a total team effort as all phases contributed to the victory,” said head coach Ethan Blanchette.

The Pioneers fell 9-8 to Pentucket on Tuesday, April 28.

Lynnfield had a 5-4 lead at halftime. The game was tied at eight with less than five minutes remaining in the game but the Sachems scored the game winning goal late in the second half.

Fanikos led the Pioneers with four goals. Buckley had a goal, an assist and recovered four ground balls.

“Lynnfield was in position to break their losing streak but following a few near misses and a tough break that saw the Pioneers trying to get the ball back with a man-down, it just wasn’t enough,” said Blanchette.

The Pioneers dropped a 7-6 heartbreaker to Peabody on April 29.

Lynnfield had a 6-4 lead with 10 minutes remaining in the game. Peabody managed to tie the game at six down the stretch. Peabody was awarded what Blanchette called a “controversial free-position shot,” which the Tanners took advantage of by scoring the game winning goal.

“Another solid performance but it just wasn’t quite enough for the Pioneers, who continue to play stout defense to keep the team in games but just have trouble finishing when necessary,” said Blanchette.