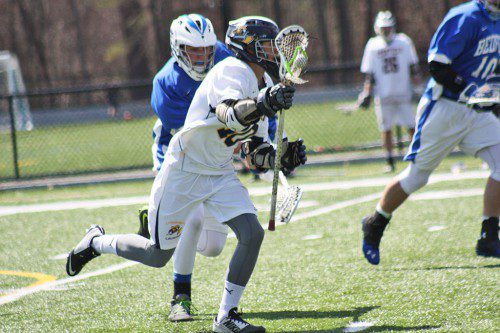 LYNNFIELD — The boys’ lacrosse team won both of its games last week, improving to 5-5 on the season.

“We knew we had a tough schedule this week against the 6-1 Pentucket Sachems and our league rival, 8-3 North Reading Hornets but I thought we’d be up for the challenge,” said head coach Joe Papagni.

The Sachems scored two goals during the second quarter. Knee scored the locals’ third goal of the contest after he was set up by Garrity. The game was deadlocked at three at halftime.

Senior Alex Soden gave the locals a 4-3 lead in the beginning of the third quarter after he was set up by senior captain Jake Forgione. Pentucket tied the game at four late in the third quarter.

Pentucket took a 5-4 lead halfway through the fourth quarter. With two minutes remaining in regulation, Martin scored the game-tying goal after receiving a pass from Knee.

“Chad and Jonathan were not going to be denied and they came through for us,” said Papagni.

Forgione won the face-off at the beginning of overtime. After Papagni called a play, Forgione found an open Knee, who scored the game winning goal. The Pioneers’ bench emptied after Knee scored and celebrated the locals’ 6-5 overtime victory.

“I could see it in their eyes that these seniors were not about to pack it in and be satisfied with playing a good game,” said Papagni.

Ganter finished with 15 saves in net against the Sachems.

Lynnfield took an early 2-0 lead after Knee scored two goals, assisted by Garrity and junior Matt Miller. The Hornets scored a goal with two minutes remaining in the first quarter, making the game 2-1 after one.

The Pioneers kept rolling during the second quarter. Martin scored a goal, assisted by Soden. Knee scored an unassisted goal, which gave the Pioneers a 4-1 lead at the break.

Soden scored a goal in the beginning of the third quarter, assisted by Knee. Knee scored his fourth goal of the contest after receiving a pass from Garrity, giving the locals a 6-1 lead after three.

Ganter finished with nine saves in net against the Hornets.

“It was a very successful week for us and both games were a total team effort,” said Papagni. “We got great leadership from our captains, great goaltending from Ganter, solid tough defense and a balanced offensive attack. We started believing in our capabilities and went out and executed.”

The Pioneers faced Triton on Tuesday, May 5, taking place after deadline. Lynnfield travels to Georgetown on Thursday, May 7, beginning at 7 p.m.