Girls’ soccer team gets its half right 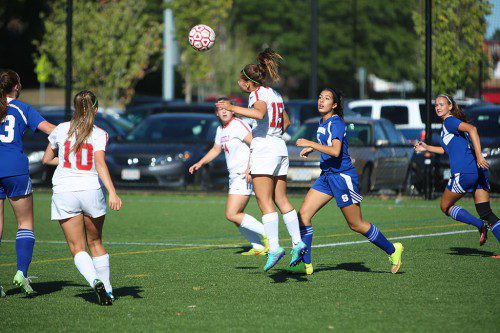 CHRISTINA LEBLANC, a sophomore forward (#15), assisted on Wakefield’s only goal of the game as the Warriors tied Stoneham, 1-1, yesterday at Walton Field. On the left is senior midfielder Brianna Smith (#10). (Donna Larsson Photo)

WAKEFIELD — The Wakefield Memorial High School varsity girls’ soccer team was back in action on Thursday as it hosted Stoneham at Walton Field.

The Warriors were seeking their first win under new head coach Stephanie Martin and she hoped that after preparing with some strong competition early on her team would be ready to tackle the Spartans.

With two evenly matched teams, it was a harrowing 80 minutes of back-and-forth soccer, and in the end, it finished level on the scoreboard at 1-1.

Wakefield has struggled out of the gates to start games well, and this game was no different as Stoneham got on the board first and took a 1-0 lead after the first five minutes of play.

For much of the first half, Wakefield struggled to find its  footing as Stoneham used its size and strength to its advantage against a smaller, quicker Wakefield team.

With time winding down in the first half, Wakefield finally got a chance to display how dangerous its speed can be, as it tied the score with Christina LeBlanc feeding Hailey Lovell in on goal, and Lovell tucked it into the net to tie the score at one goal apiece with just over two minutes remaining in the first half.

Emma Hickey started in net for Wakefield and played well after Stoneham scored the initial breakthrough goal. Coach Martin opted to change keepers at halftime and Courtney Hill stood between the posts in the second half.

With both teams seeking the go-ahead goal, there was plenty of end-to-end play in the second half.

Wakefield’s speed allowed it to play along the outside with Alyssa Corso feeding it up to Kelsey Czarnota as she raced down the sidelines time after time in the second half.

Czarnota teamed up with Lovell and Abby Chapman on several give-and-go plays to lead each other in on goal on a number of occasions in the second half. but were unable to connect on the final ball in to get a shot on goal.

Ana Lucas and LeBlanc played well and showed some impressive speed along the sidelines as well, providing the Warriors with more options to stretch the defense.

In the midfield Allee Purcell and Brianna Smith controlled the play for the Warriors, sending long passes through the air up to the forward players, allowing Lovell and Chapman to go to work on the Stoneham defense.

On defense Jillian Fiore and Christina Freni did just about all they could in front of both Hickey and Hill in goal, clearing balls off the goal line, sacrificing their bodies to block shots and through balls, and getting in the way of runners all game.

Wakefield had plenty to do on defense as well with Stoneham utilizing its long throws to move the ball up the field in a hurry. The Spartans took over 10 corners in the game, and seemed to come closer to scoring each time.

On the first four corners of the second half, Hill was called upon to make a save, denying Stoneham the goal that would have put the Spartans ahead. The culmination of the defensive effort came when Hill punched a sure-goal up off the crossbar and out to the edge of the 18-yard box, where Wakefield’s defense cleared the line.

Despite each team getting their chances to score neither could net a winner, and after the 80 minutes had been played, both teams left with one point to show for their efforts.

The game did end on a bit of a sour note for the Warriors as Chapman had to be helped off the field late in the game with what looked to be a serious injury to her leg.

Coach Martin spoke after the game saying, “It’s kind of the same story, we showed up for one half again,” she said. “That’s been our theme this season. We don’t play the full 80 minutes. Hailey had a nice goal off Christina LeBlanc. That was good we got some momentum for that.

“I thought the second half was very good we just couldn’t find the back of the net. We had our chances. We were more intense and more aggressive in the second half,” continued Martin. “Allee Purcell had a fantastic game. Alyssa Corso and Jill Fiore were solid in the back. The punch (by Hill) on the corner, that saved the game. She played dynamite, she is really progressing with confidence.”

On Wednesday, Sept. 21 the Warriors play Wilmington and Coach Martin know they will have to bring their “A” game for the full 80 minutes.

“They’re a fabulous team,” Martin said of Wilmington. “They’ll be much faster (than Stoneham), but I do believe we can keep up and run with them. If they play their game I have all the confidence in them

“We’re going to have a few days of hard practice to get ready for them. We’re not going to back down from them. We won’t be afraid of them,” continued Martin. “We are improving every day, and we’re going to stay positive, and get those points.”

Second Half — No Scoring.