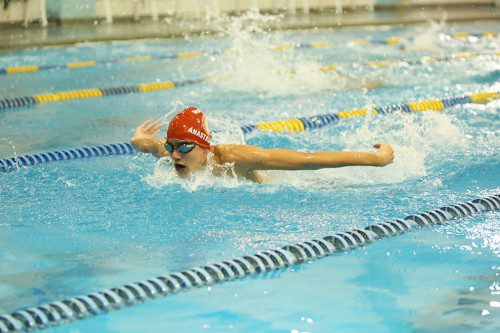 CHRIS ANASTASIADES, a freshman, qualified for the state meet in the 100 butterfly with a first place time of 1:01.31 in Wakefield’s 90-80 victory over Burlington. (Donna Larsson File Photo)

MALDEN — Headed into Tuesday’s meet against Burlington, the Warrior girls’ swim team knew that a win would not come easy.

Wakefield had everything it could handle against the Red Devils but pulled away after the 200 freestyle relay to earn a 90-80 triumph in the home finale at the Malden High School Pool.

Wakefield increased its record to 3-4 on the season and finished with a 3-3 home record this fall. The Warriors final two dual meets are on the road.

“We knew this could be a close one and it was up until the 200 free relay. (There were) Some exciting finishes,” said Coach Kathy Byrne. “Chris A (Anastasiades) qualified for states in the fly and our 200 free relay did so, too. It was a fun and successful Senior Day.”

Anastasiades, a freshman, captured first place in the 100 butterfly as he clocked in at 1:01.31. That was good enough to qualify him for states.

The meet begin with a first place in the 200 medley relay at 2:08.13. The four swimmers were Guay, Pecjo, Guarino and Sweeney.

Anastasiades then earned a first place finish as he touched in 2:01.33 in the 200 freestyle.

Sweeney, a sophomore, captured the top spot in the 50 freestyle as she swam a time of 28.22 seconds.

In addition to the state qualifying performance of Anastasiades, Guarino, a senior, took second with a time of 1:13.82.

In the 500 freestyle, Colliton was Wakefield’s top finisher with a third place showing. Colliton swam a time of 7:00.01.

Wakefield also took a second place in the 200 freestyle relay which helped its cause as well. The team of Tori Tringale, Julia Hanley, Jess Conley and Anastasiades combined for a time of 1:59.47.

Wakefield took second in the 400 freestyle relay to end the meet. The team of Conley, Colliton, Tringale and Anastasiades clocked in at 4:32.77.

The Warriors take on Lexington in a makeup meet tomorrow night at 5:30 p.m. at Minuteman Regional School Pool.