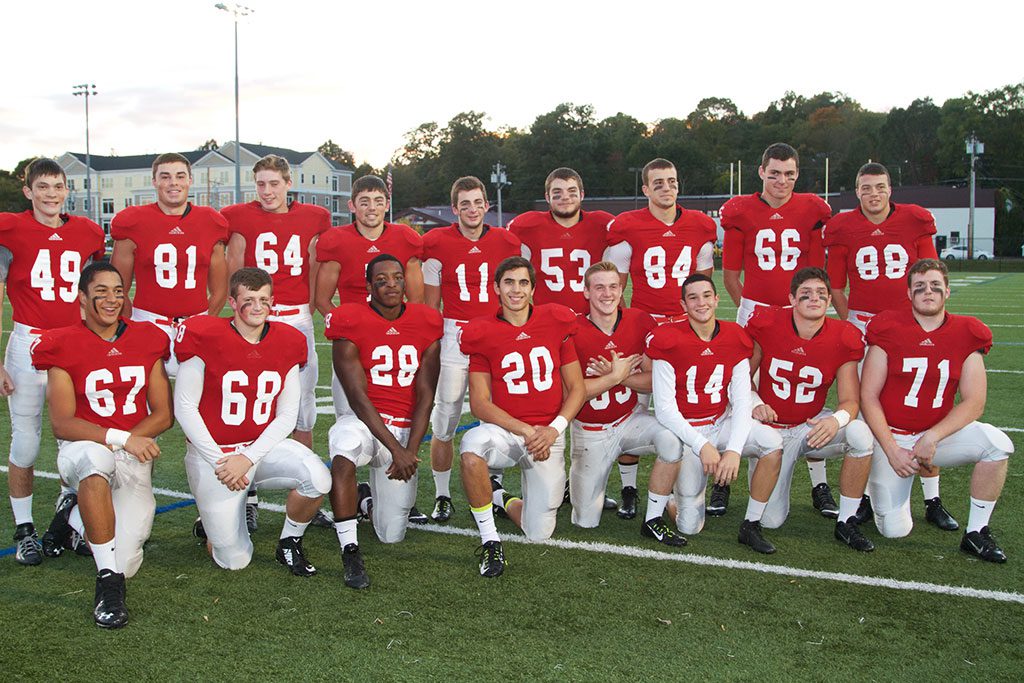 MELROSE— It’s been another joyride season for the 2015 Melrose Red Raider football team, who earned the Middlesex Freedom League title last Friday night at Fred Green Field after a 17-7 victory against a surprisingly solid Stoneham team. The Red Raiders now sit at 6-0, their best record in a number of years, aiming to wrap their regular season undefeated at 7-0 before the start of playoffs. They get that chance tonight when they travel to Woburn to take on the 2-4 Tanners.

On October 16 Melrose made that job a lot easier with a workmanlike performance against the Spartans. Melrose quarterback Julian Nyland had another great night for the Raiders, scoring one touchdown and throwing for another, finishing 9-11 in passing for 180 yards and 2 touchdowns.

Melrose were forced to compete once again without standout running back Mike Pedrini, sidelined from a concussion from the Wilmington game, but officially cleared to play. According to Melrose head coach Tim Morris, it was better safe than sorry. “We didn’t want to use Mike,” he said after the game. “We really tried not to do that, and we moved some other personnel around and threw the ball a little more.”

And they did it well, using a variety of offensive targets such as Jay Tyler, Tom Calvert, Ryan Censullo, Will Brincheiro and Alex Burton. Melrose defense was once again tough to penetrate, with numerous blocks and tackles by Cameron Hickey, who is having an All Star season for Melrose, and on Friday, helped fill in Pedrini’s absence. “Cam did a great job for us playing halfback,” Morris said. “He’s usually a tight end, but that was more of a fullback position. That was good to have him there. They were a very physical team up front. Our guys held their own, but it was rough sledding.”

While there was really no doubt Melrose would take the victory (they led in most categories over the night) credit Stoneham for keeping Melrose to their lowest touchdown total of the season.

“Stoneham was a very good team,” said Morris. “They’re big and strong up front. Their strategy was to keep the ball away from us and it took us a while to get on track for sure. They controlled the ball most of the first half.”

The Spartans also took advantage of first possession, marching the ball down to Melrose territory behind the work of Stoneham quarterback Brandon Can, and a strong Spartan running back Brendan O’Neil, who proved tricky to contain in the opening drive. However, a botched 26-yard field goal attempt by Stoneham’s Daniel Sweet gave Melrose the ball back and took the momentum out of Stoneham.

Melrose wasn’t able to get on the board until the close of halftime when Nyland connected on a 30 yard pass to Alex Burton and other 15 yard pass to Burton, which set up a 28-yard field goal by Mike Cusolito at the buzzer. Melrose went into halftime up 3-0.

After the half, Stoneham’s Cann took an injury and left the game (returning later) while Melrose found success on their next possession. with Nyland using a number of receivers to drive the ball to Stoneham territory. He first connected on a 35 yard pass to Tom Calvert to bring Melrose downfield. That was capped by a 10 yard run by Melrose senior Jay Tyler and another pass to to Ryan Censullo. A 10 yard pass to Steven Abbott set Nyland up for a quarterback keeper right into the end zone that gave Melrose a 10-0 lead.

Fans were on their feet when Ryan Censullo ran a 70 yard punt return for a touchdown, but disappointed when it was called back on a holding call. Nyland made up for that however, by connecting on a 55 yard bomb to a wide open Will Brincheiro who ran in for a Melrose touchdown, lifting the Raiders 17-0 after a good Cusolito kick. It proved the final score in the contest, giving Melrose their first 6-0 start in several seasons.

Up next is a regular season finale against Woburn on the road at Connolly Stadium at Woburn High. Last season, Melrose escaped Woburn in a gripping 20-19 win that came down to a 4th and 1 goal line stand. But one year later the situation is quite different. Woburn is 2-4 this season (not 7-0 like last year) and is coming off a 42-0 shutout to Reading last week. The big question entering this week is whether Melrose’s Mike Pedrini will return to the lineup. According to Morris, he is cleared to play and expected to return.

Meanwhile, Melrose sits in Top 20 polls statewide and remain one of only 17 teams in the state currently undefeated. The Red Raiders hope to continue the trend tonight when they arrive in Woburn for a 7:00 kickoff.