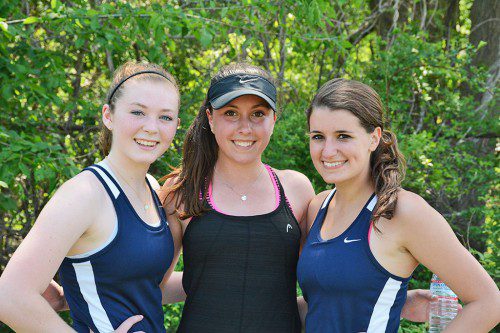 GIRLS’ TENNIS STARS, from left, Katie Nevils, Sarah Mezini and Olivia Skelley are advancing to the quarterfinal round of the State Individual Tournament this weekend at Lexington High School. (Jane Skelley Photo)

NEWTON — The girls’ tennis team competed in the North Sectional Individual Tournament at Newton South High School last weekend, and three players will advance to the next round of the tournament this weekend.

Sophomore Sarah Mezini and the first doubles tandem of junior Olivia Skelley and sophomore Katie Nevils will be advancing to the quarterfinals at Lexington High School next weekend. The three players will be joining the semifinalists from the Lexington tournament for the quarterfinals. The tournament consists of players from Division 1, 2 and 3 schools.

Mezini advanced to the quarterfinals for the second straight year in first singles. After being awarded a bye in the first round, Mezini defeated Andover’s Cardire Templer in two sets, 6-3, 6-1, during the second round of the tournament. Mezini defeated North Reading’s Marissa Galuppo in two sets, 6-0, 6-3, during the third round. Mezini concluded the opening weekend of the tournament by defeating Swampscott’s Vivian Gere in two sets, 6-3, 6-1, in the quarterfinals of the Newton South tournament.

“Mezini, who was seeded first at the Newton South site, led in all her matches this weekend, scoring often with her first and second serve as well as with her powerful ground stroke game,” said head coach Craig Stone. “Mezini hits with such pace that she often runs her opponent off the court or pushes her so deep in the court that she creates a number of winners and forced errors. She mixes in very effective drop shots, which keep her opponents off balance as well.”

Skelley and Katie Nevils defeated their Newton South counterparts in the quarterfinal round. After losing the first set 6-7, they won sets two and three 6-4 and 7-6 (7-2) respectively.

“In the third set, Lynnfield went down 3-0 and came back to go ahead 4-3 and 5-4,” said Stone. “Newton South kept batting back, taking the match to another tie breaker. Fortunately, the Pioneer pair jumped out 5-1 in the tie breaker before winning the third set 7-2 and the match.”

Sophomore Katie Nugent competed at second singles during the tournament. She defeated Westford’s Victoria Donejcy in two sets, 6-2, 6-0, during the first round of the tournament. Nugent fell 0-6, 4-6 to Andover’s Pooja Mukund in the second round.

Senior captain Izzy Figucia defeated Waltham’s Aaroh Shah in straight sets, 6-0, 6-0, during the first round of the third singles tournament. She fell 2-6, 0-6 to fifth seed Veronica Op of Westford in the second round.

After senior Rachel Maglio and junior Amanda Stelman were awarded a first round bye in the second doubles tournament, the duo fell 4-6, 3-6 to their Wayland opponents in the second round.

Stone praised his squad’s performance in the State Individual Tournament.

“This tournament provided us with an opportunity to play two days of very competitive tennis,” said Stone. “It’s matches like these, win or lose, that will help us prepare for the team state tournament ahead.”

In first doubles, Skelley and Katie Nevils were trailing 0-3 during the first set before storming back to win the first set 6-3. They won the second set 6-1.

The second doubles tandem of Nugent and sophomore Camie Foley defeated their counterparts in two sets, 6-0, 6-4.

Stone said the locals’ victory over Rockport showcased the team’s depth as the Nevils sisters, Skelley and Maglio rested.

“We have a lot of depth and it’s difficult getting everyone into varsity matches,” said Stone. “I have nothing but the highest praise for our varsity starters that sit out during the regular season play to allow their teammates an opportunity to play and gain valuable match experience that will be used later in their careers. This unselfish attitude allows their teammates to become better players, and us a better team.”

The Pioneers began last week defeating North Reading 4-1 on May 11. The Hornets were 12-0 heading into the match.

Mezini defeated her first singles counterpart in two sets, 6-0, 6-1. Kelley Nevils cruised to a decisive two set victory during second singles, 6-0, 6-1. Figucia pulled out a narrow 7-5 victory after winning six out of the final eight games during the first set of her third singles match. She won the second set 6-2.

Skelley and Katie Nevils’ first doubles match consisted of a number of “peaks and valleys,” but they won the match in two sets, 6-4, 7-5.

In second doubles, Maglio and Stelman lost their match in two sets, 3-6, 6-7. North Reading’s second doubles team has not lost a match this season.

The Pioneers faced Newburyport on Monday, May 18, taking place after deadline. Lynnfield’s final regular season match against Marblehead will take place on Wednesday, May 20, beginning at 3:30 p.m.

The next round of the State Individual Tournament will take place this weekend at Lexington High School.