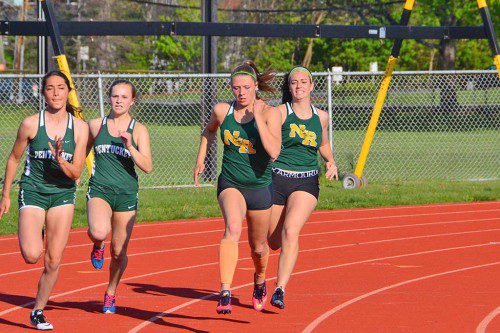 SENIOR Alexa Capozzoli (right) hands the baton off to her classmate Julia Valenti in the 4 x 100 meter relay. In an exciting finish, Valenti caught her Pentucket opponent at the wire to propel North Reading to a victory. (Courtesy Photo)

NORTH READING — The girls’ track team made history on Wednesday, May 11 at the Arthur J. Kenney field by defeating Pentucket 82 to 63 and Newburyport 119 to 26 to go 8–0 for the season stretching their undefeated streak to 25–0 over three years to win their third straight Cape Ann League Championship.

Not to be outdone by Julia’s performances on the day was sophomore Juliette Nadeau who leapt to first place in the Triple Jump with a school record performance of 36’ 9.5” bettering the previous record of 36’ 3” set by Brittany Angiolillo in 2011. Juliette’s mark ranks her first in the Cape Ann League, Division 4 rankings and All State rankings. Only three girls jumped farther at last year’s All State Championship with jumps of 36’ 11”, 37’ 7.5” and 38’ 6.” The Hornets now have four athletes who have qualified for the state championship in the triple jump. Joining Juliette with that honor are Jenna Raffael (32’ 7”), Kaitlyn Shevlin (32’ 2”) and Julia McDonald (32’ 1.5”).

The Hornets proved supreme in the Long Jump, Javelin and Pole Vault, sweeping all three events (1–2–3). In the Long Jump, Victoria Grasso led the way with a leap of 16’ 10.5” followed by Juliette Nadeau (15’ 11.75”) and Megan Lawlor (15’ 8.5”). All three have qualified to compete at the state championship. The Hornets also swept the Javelin with another three athletes qualifying for the state championship, all with personal best throws. Julia McDonald took first with a toss of 112’ 10”. Samantha Trulli broke the 100 foot barrier going 101’ 3” with Jenna Raffael taking third (95’ 0”). The three of them rank third, sixth and ninth in school history while McDonald is ranked first in the CAL and Division 4 rankings and sixth in the All State rankings. In the Pole Vault, Valenti’s first place was followed by Rachel hill (10’ 0”) and Victoria Grasso (8’0”). The Boston Globe featured an article about these three vaulters titled “Taking a Giant Leap” in the Boston North section of the Globe on May 8 highlighting the team’s success in an event that is often misunderstood.

In the distance events, sophomore sensations Meredith Griffin and Olivia Esposito led the way. Meredith Griffin took first in the Mile Run (5:26.43) and the Two Mile Run (12:23.44) followed in the Mile by Claire Finnegan’s second place finish in a personal best time of 5:50.83. Olivia Esposito picked up first in the 800 meters with a time of 2:30.65.

The team competes this Saturday, May 21 at the Cape Ann League Open Championship at Masconomet Regional High School where the league’s top athletes will compete for the CAL Open Championship trophy. The competition starts at 9 a.m. and continues to 2 p.m. Track fans come cheer on your Hornets!