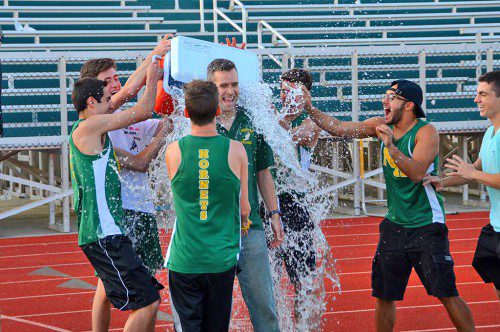 NORTH READING — The North Reading Boys Spring Track team finished its historic undefeated season as with two victories versus Pentucket (82–63) and Newburyport (81–64) last Wednesday at the NRHS Track. The 8-0 Hornets completed their second ever CAL Dual Meet season title in history, the first being in 2013. “This accomplishment is a total team effort,” said Head Coach Ryan Spinney. “Our coaching staff and athletes are second to none and everyone played a part in this historic event. I couldn’t be prouder of this team,” said Spinney. 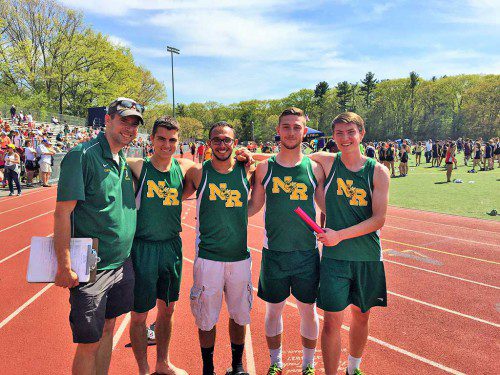 THE NRHS 800m Sprint Medley Relay (SMR) team that qualified for Nationals on Saturday, May 14 at the Boosters track meet in Andover. The 800m SMR is a particular relay race that is not regularly run in track meets. For North Reading, this was the only opportunity to put together a team to compete in this race. From left: Head coach Ryan Spinney, Junior Tommy Helms (400m), Senior Captain Nick Copelas (200m), Junior Matt Mccarthy (100m), and Senior Captain Jackson Hastings (100m). (Courtesy Photo)

The champion Hornets hope to continue their successful season as they will compete at the CAL Open Championship on Saturday, May 21 at Masco.

Senior Captain Brendan Carter ran a personal record 4:34.73 in the Mile at the Andover Boosters meet last Saturday and that time puts him fourth all-time in NRHS history.

The biggest thrill for the team came in the Sprint Medley Relay as the team of Jackson Hastings, Matt McCarthy, Nick Copelas and Tom Helms ran a time 1:37.54 which has qualified for the Championship category at Nationals which will be held in North Carolina in June. A major accomplishment for these gentlemen!