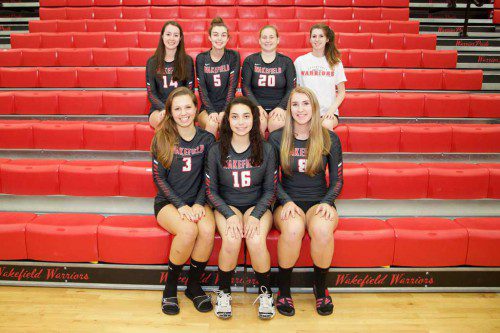 WAKEFIELD — The season is winding down for Nicole Trudeau and the varsity girls’ volleyball team at Wakefield Memorial High School as it hosted New Mission on Wednesday in their final home match at the Charbonneau Field House.

The Warriors sent their seniors out with a victory as they defeated the Titans 3-0. Wakefield is now 4-15 overall and 1-15 in the Middlesex League Freedom division.

It was evident from the beginning that the Warriors were the stronger team, as they claimed the first set 25-11 in easy fashion.

Coach Trudeau was mostly impressed with the serving of one player in particular in the first set saying, “Maddy Shea had I think 13 straight serves. That’s was outstanding. It’s great for her. She has a really strong serve.”

She went on to praise the improvement she noticed in her opponent, as the two teams had met earlier this month saying, “I have to say those kids are much better than the last time we saw them.”

She knew the focus of the evening was her seniors last chance to play together in the Charbonneau Field House.

“Really what tonight was about was giving the seniors a chance to play together in their last home game. It’s a tribute to everything they’ve given to the program.”

Shea, along with Sarrah Chouiakh, Jess Barbera and Elizabeth Germino saw a lot of action in their final appearance in front of the home crowd. Other seniors on the roster included Mackenzie Molloy and Erin Murphy.

“In this program they’ve been the ones that have been here from the very beginning. We had to send them out with a win, send them out playing all together.”

Coach Trudeau expressed her emotion as the four seniors that initiated the program left the court for the last time in Wakefield.

“It’s sad,” she said. “I couldn’t say much because I was very sad. I can’t believe these kids are not going to be here anymore. They’re the first ones who started with us.”

She shifted focus to the game, one that saw the Warriors make quick work of the Titans disposing them in straight sets.

Another senior who stood out to coach Trudeau in this match was Barbera.

“Jess Barbera came out of nowhere,” She said. “She was an animal, attacking everything. She was great.”

Barbera and sophomore Julia Brown led the Warriors to an easy win in the second set by a 25-8 margin.

“It was nice to see them play with that confidence,” Trudeau said.

The Warriors got some fine service in the third set en route to a 25-15 victory from sophomore Ally Coggswell, Brown, Barbera, Germino and junior Maggie Tryder.

The coach was glad to see her team come out on top, as the previous three matches had not been up to her expectations.

“The last three games we played was not the highlight of our season,” she said in reference to the Warriors dropping games to Melrose, Burlington and Watertown, winning just one set against Burlington. “It was a lull in the season to be honest. They did not play nearly to their potential in any of those games. I think they expected more from themselves and it is hard when that happens. We have said that our performance in the last half of the season sets us up for next year.”

The team has one final match and it’s one that coach Trudeau knows they want and she hopes they’ll come out fired up.

“That’s what we need,” she said referring to playing with emotion. “They need to push, they need to play aggressively.”

Coach Trudeau knows what lies ahead of her team, one of the best players in the league, if not all Massachusetts.

“Woburn is Friday,” she said, “They’ve got Elle (Brennan) in the middle.”

The Tanners are rolling after winning three straight games and it is their final home game for the season as well.

“It’s their Senior Night,” Coach Trudeau said. “We’re hoping to go in there and mess things up for them.”

Still with one game left, the Warriors are working hard to prepare for their final game tomorrow at 4 p.m. at Woburn High School.

“We’re practicing a lot on blocking technique and shutting down a strong middle,” Trudeau said. “I was surprised to see them a little timid against Woburn last time, so we’ll see how they do.”

She is expecting the Warriors to come out with some more fire this time.

“They always want to get out there and rough them up. They better come out ready to play,”

Still questions remain as one of the key players for the Warriors has been out.

“Abbie (Badgett) had an injury so she is still a game-time decision whether or not she’ll play. I have all the confidence in the world in Maggie Tryder and Julia Brown, either way we’ll be OK in the middle. We could use her (Badgett) nice, long arms and tallness for blocks to shut that girl (Brennan) down. The defense will just have to be stronger.”