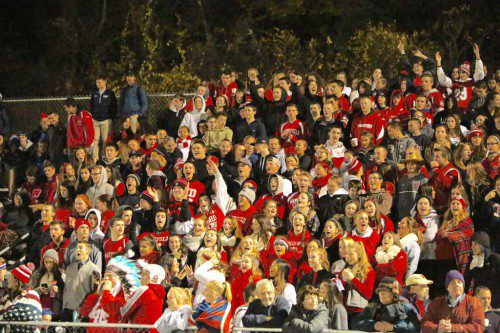 THE WMHS football team drew quite a crowd for homecoming last Friday night at Landrigan Field. The Warriors will be looking for strong support from their fans when they face Melrose in a Div. 3 Northwest quarterfinal game at Fred Green Memorial Field. (Donna Larsson File Photo)

MELROSE — The recently departed Yogi Berra once said that is deja vu all over again.

Those words could easily describe the Wakefield Memorial High and Melrose High football quarterfinal matchup in the Div. 3 Northwest playoffs as the two Thanksgiving Day rivals meet once again in the playoffs. That quarterfinal contest is scheduled for tomorrow night at 7 p.m. at Fred Green Memorial Field.

The Warriors (2-5) are the eighth and final seed in the Div. 3 Northwest sectional while the Red Raiders (7-0) are the top seeded team.

The two rivals played each other a year ago in the quarterfinals at Green Field and Melrose prevailed by a 24-0 score. The Warriors will hope for a better result this time around.

“Playing Melrose, whenever it is, is a special event for our football program. Last year, we made some mistakes early and they were able to capitalize,” said Coach Steve Cummings. “We have used some of the things that we did in that game and compared it to this year. They have a lot of new guys in their lineup but they have a very successful system that they run, which is a big reason they have had so much success since we moved to the new playoff format. We have a lot of familiarity with what they do because of the three meetings last year, so that should help us Friday night.”

Due to a change by the principals and athletic directors in the Middlesex League, the two rivals regular season game is now on Thanksgiving. So this is the first time this season they are facing each other.

Melrose leads the longstanding rivalry, 56-41-6, with Friday’s game being the 104th meeting between the schools. The rivalry dates back to 1901. Wakefield, however, leads the Thanksgiving Day 29-23-3, which dates back to 1960.

The Warriors have lost four in a row to the Red Raiders including all three meetings last fall. Wakefield’s last victory against Melrose was a 17-14 win in overtime in September 2013.

“The Wakefield/Melrose rivalry is one of the best in the state. Being a guy that didn’t grow up around here, I got my first taste coaching the freshman team in 2008,” said Cummings. “I could see the intensity, the passion and the respect both programs have and I have been in the middle of it ever since. Right now, Thanksgiving is the furthest thing from anybody’s mind. We are playing Friday night to try and keep our season alive, so knowing that we will see them again in a month hasn’t registered yet.”

Wakefield will have its hands full against Melrose which has talent at many positions. Junior Mike Pedrini is Melrose’s best player. He runs and catches the football very well. Also, senior QB Julian Nyland has taken over as the signal caller this fall and the Melrose offense hasn’t skipped a beat at that position.

“First of all, Mike Pedrini is a special football player. It is not often that you watch a kid at this level that has such a huge skill set. He has incredible feet, great balance, runs great routes and he catches everything that is thrown at him,” said Cummings. “Defensively, he makes plays sideline to sideline. He is tough enough to grind out yard after contact and shifty enough to make guys miss in space. He really doesn’t have a weakness in his game.

“Nyland is a great fit at quarterback for the Melrose offense. He is not a guy that is going to sit in the pocket and throw the ball 25 to 30 times a game and they don’t ask him to,” added Cummings. “He is a great athlete. He make good decisions with the ball and he puts his guys in positions to make plays. He is a constant threat with the ball and between him, Jay Tyler and Pedrini, they have three guys in the backfield that can hurt you on every play.”

Melrose has clinched at the very worst a share of the M.L. Freedom division title with its final league game against Wakefield on Thanksgiving. The Red Raiders have defeated league rivals Burlington, Stoneham, Watertown, Wilmington along with non-league foes Masconomet, Waltham and Woburn.

Wakefield has struggled this season mostly with the execution of its offense in the red zone and with turnovers. As a result, the Warriors had to win last Friday night and get some help just to get into the playoffs. Wakefield’s first win was against Stoneham and it beat Winchester last week. The Warriors losses have come against Beverly, Abington, Watertown, Wilmington and Burlington. In three of the five setbacks, Wakefield was in the game to the very end and it had its chances to win.

“I know our record would suggest otherwise but I was never really worried about not making the playoffs. My focus has always been on getting our team to be at the top of its game for this part of the season,” said Cummings. “Right now, everybody is 0-0. We have a big opportunity Friday night to show what type of team we really are and I am looking forward to it.”

If the underdog Warriors can prevail then they will face the winner of a quarterfinal matchup between fourth-seeded Wayland (5-2) and fifth-ranked Arlington (5-2). That contest is scheduled to be played tomorrow night as well at Wayland High School.