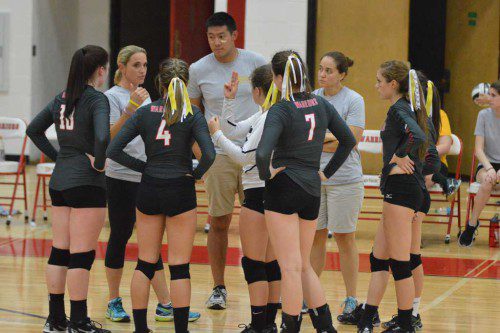 THE WMHS girls’ volleyball team huddles to discuss strategy during a recent match. The Warriors didn’t have too much to worry about on Friday as they rolled to 3-0 triumph over New Mission in a non-league match.

BOSTON — Even though the Wakefield Memorial High girls’ volleyball team is in its third season as a varsity program, the Warriors haven’t forgot where they came from.

Wakefield cruised to its second victory of the season as it topped New Mission by a 3-0 score in a non-league match on Friday afternoon at New Mission High School.

The Warriors increased their overall record to 2-8 on the season. In the Middlesex League Freedom division, Wakefield is 0-8.

“We beat New Mission 3-0 very quickly. They are a brand new program and that was very evident,” said Coach Nicole Trudeau. “We decided to make it more of a day about strategy and seeing what other positions our girls could play. It was a day about playing together and building diversity in their individual games. It was nice to grab another win. I was very proud of our girls for playing together and cheering but also being respectful of a program that was just starting out.”

The Warriors are now 2-0 in non-league competition and will face New Mission again on Wednesday, Oct. 28 at 4 p.m. at the Charbonneau Field House.

Wakefield’s other victory came against Northeast Metro Tech by a 3-0 tally on Sept. 14 at the Charbonneau Field House.

Now, the Warriors would like to earn their initial league victory. The first chance they will get to earn that is this afternoon at 5:15 p.m. against Winchester at Winchester High School.