Golf team is still young but much more experienced 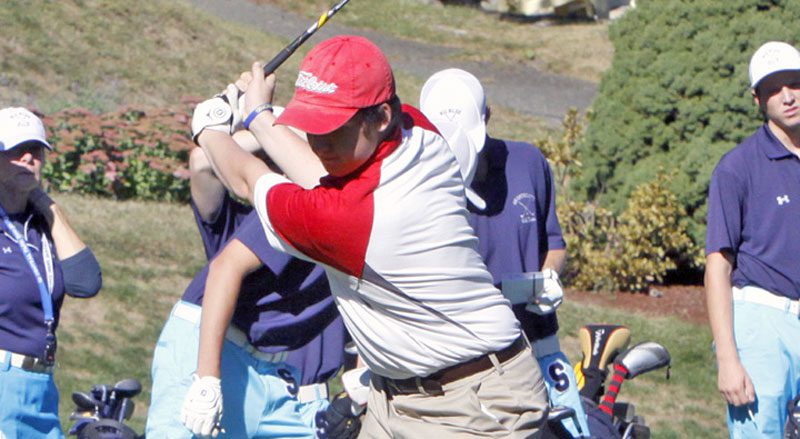 By JIM SOUTHMAYD
WAKEFIELD — Last fall, the Wakefield Memorial High golf team had one senior and nine underclassmen on its roster. This season, the Warriors are in the same position with only one 12th grader and a host of underclassmen on the squad.
The difference, however, between the 2013 and ‘14 teams is that the Warriors are a much more experienced and polished squad than they were a year ago.
Wakefield finished the ‘13 season with an 8-9 overall record and 4-7 record in the Middlesex League Freedom division opener. The Warriors also qualified for the Div. 2 North tournament based on their second place finish in the M.L. Freedom division.
“We had three days of tryouts playing nine holes at the Thomson Country Club. We will be splitting our home matches between the Thomson and Bear Hill,” said Coach Dennis Bisso. “We want to thank the people at both courses because if we couldn’t play and practice there we wouldn’t have a program.
“We had 25 candidates sign up but only 14 showed up for tryouts,” added Bisso. “We had a great turnout and we have many returning lettermen that played a lot of golf over the summer with about 40 to 50 rounds of golf. We should be much improved from last year when we had five freshmen on the roster.”
Wakefield is carrying 10 players on its roster and the only newcomer is Kevin Murray, a junior, who made the cut after tryouts. He replaces Colin Horrigan who graduated.
The other nine golfers are all returning veterans.
Leading the way is senior co-captain Kevin Lamattina. Lamattina played at the number one and two spots a year ago and is likely to return to the top of the lineup. Lamattina has worked to improve his game and has.
Junior Dylan Melanson returns and is also a co-captain. Melanson played in the upper half of the order a year ago and was Wakefield’s longest hitter. Bisso said that Melanson also works at Thomson and that allowed him to get in some practice over the summer. Bisso said the junior has shown much improvement.
David Melanson, a sophomore and Dylan’s cousin, returns after a year’s experience and will most likely be among the top three positions in the Warrior lineup along with Lamattina and Dylan Melanson.
Another Melanson, junior Steve, who is cousins with both Dylan and David, returns to help solidify the middle of the lineup. Steve Melanson is a good athlete who was injured late last season. He missed the last four or five regular season matches. His return to the lineup will be a welcome sight.
Mike Guanci, a sophomore, returns to the squad after a strong freshman campaign. Guanci is a terrific athlete and Bisso says that he hits the ball a long way with great accuracy.
Tim Hurley, also a sophomore, returns and has worked on his short game. Hurley play mostly at the seven and eight spots a year ago. Bisso believes he could possibly move up to five this year.
Another 10th grader, Austin Collard, returns and could be playing the in the sixth spot of the order. Collard player in the lower end of the order a year ago.
Stephen Marino, a junior, returns for a third year and has been very strong off the tee. He could be playing the six or seven position of the lineup.
Sophomore Justin Sullivan was an alternate for Wakefield last year playing the majority of his golf at the number nine and 10 positions of the lineup. Sullivan has improved his game and will be looking to work his way into the varsity lineup.
“I think we will have more consistency and we should be much stronger at the lower end of our lineup,” said Bisso. “I’m very positive we will be a better team. We are playing 18 matches this year. I think we play Stoneham and Belmont twice. We have Burlington two times as well.
“The boys are tested and the Middlesex League is strong league in both the upper and lower divisions,” added Bisso. “The boys are also familiar with many of the courses in the league. It is also the one sport where playing on your own is the ultimate home advantage.”
Burlington captured the M.L. Freedom division championship a year ago while Wakefield and Wilmington tied for second place. All three teams made the postseason last fall.
“Burlington has won the lower division the past couple of years,” said Bisso. “Winchester, Lexington, Reading and Woburn are always strong teams in the upper division. We are hoping to have a good year.”
Wakefield opens up the season tomorrow afternoon at 2 p.m. when it plays Stoneham at the Unicorn Golf Course.