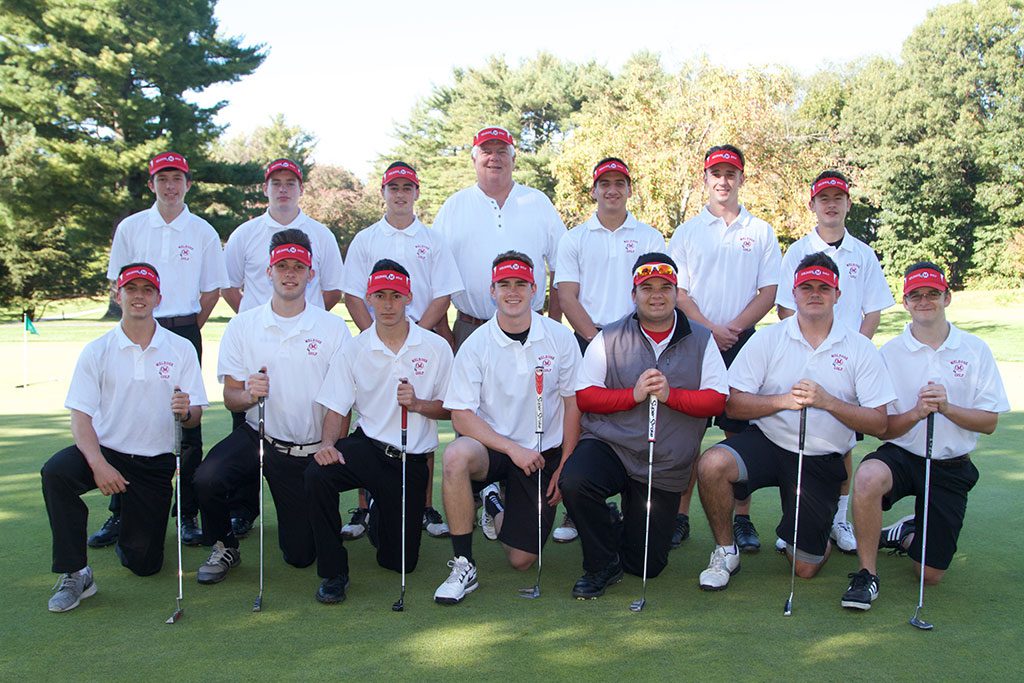 THE MHS golf team wrapped up their season with an appearance at the MIAA Div. 2 North Sectionals on Monday. Pictured are the team and coach Rick McDermod. (Donna Larsson photo)

MELROSE — The Melrose Red Raider golf team finished their season in fine style. A victory over Arlington last week gave them the winning percentage needed to qualify as a team at the MIAA Div. 2 North tournament, held on Oct. 19 at Hillview Golf Course in North Reading. And last week, Melrose junior Mike Shea stunned competition with a first place finish in the Middlesex League Shootout at Bear Hill Golf Club in Stoneham.

“Mike had a great day,” reports coach Rick McDermod about Shea’s win. “Once I saw that he shot even par in the back and had two birdies, I knew he’d take it. He surprised a lot of people.”

Of course Melrose wouldn’t have gotten there if it had not been for their narrow win over Arlington last week. McDermod points to the solid play of Zac Phipps, who delivered the winning hole along with a big win. “He killed his opponent,” says his coach who also pointed out a big victory from senior Nick Markley, who filled in at a hole. “Markley to the rescue,” quips his coach.

With that victory Melrose (5-5-1, 3-2 league) was able to compete in the MIAA Division 2 Sectionals on Monday for the first time in three years, They were represented by Mike Shea, Justin Crowley, Drew Maguire, Sean Connolly, Kyle Sikora and Zack Farrell. Taking the top spot on Monday was North Andover, who will advance to states as a team along with Beverly, Malden Catholic and Concord-Carlisle. Melrose shot well for the day, with Justin Crowley topping the pack with an 83. Both Farrell and Shea shot an 84, Maguire an 87, Connolly 92 and Sikora 94. Collectively, Melrose shot 338.

This season this young Melrose team made a serious run at the Middlesex Freedom League, finishing 3-2 in the league and very respectable 5-6-1 overall against some tough large teams such as Winchester and Lexington. To McDermod, the greatest pride was the vast improvement in one season, which was beyond expectations. “To go from a 1-10 season to 5-5-1 and send a team to Sectionals was great. We scraped by and got things done.”

He points to a season highlight tie against undefeated Belmont, which occurred in a wild fashion when Melrose’s Matt Cornelius did the unimaginable. “His shot from the clubhouse roof to preserve a hole and tie an undefeated team was a highlight of a memorable season,” says his coach.

That means the Red Raiders will be expected to be competitive in 2016. But players ought to heed their coaches parting advice, “Get out and practice.”