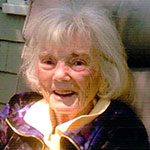 Born in Somerville on January 3, 1925, she was the daughter of the late Ernest and Helen (Sullivan) Buckley. She was raised and attended school in Somerville and was a graduate of Somerville High School.

Grace was an office supervisor for the American Mutual Insurance Company in Wakefield for many years. She also worked for Dunkin Donuts and Atlantic Food Market, both in North Reading, the Jordan Marsh Company in Peabody and at Richardson’s Ice Cream in Middleton.

Grace always put others first, she was a very kind loving woman. She was a strong advocate of “count your blessings and do not criticize others unless you have walked a mile in their shoes”. Her philosophy was to be forgiving, be a hard worker, take time and love and have fun with your family.

Family members include her loving sons, Bob Lucas of Lahaina, Maui, Hawaii and Peter Lucas and his wife Beth of Freemont, NH; daughters, Paula Greenlaw and her husband Peter of North Grafton, Diane McQuesten and her husband Richard of North Reading, Pamela Lucas of Honolulu, Hawaii and Marie Balzotti and her husband Paul of Plymouth; brother, Ernest Buckley of Tewksbury, she was the sister of the late Daniel Buckley and Betty Norton; cherished grandmother of seven grandchildren and six great–grandchildren.

Her funeral was held from the Croswell Funeral Home, 19 Bow Street, North Reading on Tuesday, November 25, followed by a funeral Mass at St. Theresa’s Church, 63 Winter St. (Rt. 62) North Reading.  Burial was in Puritan Lawn Memorial Park in West Peabody. In lieu of flowers memorial donations may be made in her memory to: Life Choice, 790 Turnpike St., Suite 302, North Andover, MA 01845. www.croswellfuneralhome.com