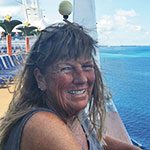 Christine was Human Resources Director for the Boston Redevelopment Authority. She was also the Adjunct Professor at Southern New Hampshire University and she formerly worked for Casa Myrna Vasquez, the Town of Westford and North Andover. She had been a resident of Dorchester for the past nine years.

She was independent, adventurous, supportive, generous and compassionate. She was the best friend you could ever ask for. She was always there to help and just listen. She was always pursuing to learn and grow. Christine set a great example to all of us. She enjoyed travel, cruising, music, reading and teaching.

She was the loving mother of Emmy Thompson and her husband Roy of Lorton, VA, formerly of Andover and is survived by her fianceé, Thomas H. “Tripp” Grosvenor, III of Dorchester, formerly of Reading; her sister– in–law, Debbie Crane of Danvers  and her nephew, Jim Liebke of Rowley.

Her funeral service will be held at the Croswell Funeral Home, 19 Bow St., North Reading on Wednesday, November 26 at 10:30 a.m. Calling hours will be held prior to the service from 9:15 to 10:15 a.m. In lieu of flowers memorial donations may be made in her memory to: North East Animal Shelter (978) 745-9888, ask for Laurie. www.croswellfuneralhome.com