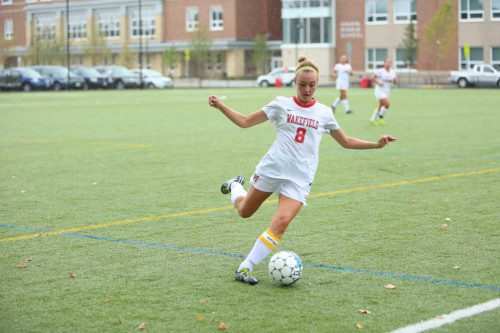 GRACE HURLEY, a senior, had a strong game in the middle of the field and earned an assist on the game-winning goal as Wakefield edged Stoneham by a 3-2 score yesterday at Walton Field. (Donna Larsson File Photo)

WAKEFIELD — The Wakefield Memorial High School varsity girls’ soccer team was in action on Monday morning as its hosted Stoneham at Walton Field.

The Warriors were in need of a win as they look ahead to a big week of games and head coach Jessica Marshall’s side delivered a magnificent performance and a 3-2 victory over the Spartans.

In the opening half, the Warriors got ahead early, taking a 1-0 lead inside the first 10 minutes.

Before the goal, Stoneham looked like the team that was going to score, as the Spartans earned a couple of early corners that they didn’t convert into goals.

Just after the five minute mark the ball rolled in on goalkeeper Emma Hickey, who shouted off the defense calling to pick up the ball. In a stroke of misfortune, the ball skipped past Hickey and a Stoneham player was quick to pounce on the opportunity. Luck swung in the Warriors favor as the Spartans’ player’s shot narrowly went wide, sparing the Warriors from falling behind.

Not long after, Wakefield’s Grace Hurley was able to obtain possession near midfield where she played the ball ahead to Mia Joyce. Joyce played the ball out wide where Jess Vinciguerra turned in a cross toward Hurley who had continued her run into the penalty area. It was a quality delivery from Vinciguerra that landed at the feet of Hurley. But a Stoneham defender had her tied up. The ball trickled past Hurley but Kelsey Czarnota ran onto the loose ball by the far post. In one motion she finished off the chance and put the Warriors in the lead for the first time at 8:57 in the first half.

“The middle is key for us,” Coach Marshall said after the win. “I felt like Stoneham was heavy through the middle. About a minute before we scored I changed our formation up to help deal with what was going on in the middle. Mia [Joyce] was doing everything she could but I felt like it was just too much for her to handle. It felt like there were four Stoneham girls on her. I put Grace over to the middle and I think it made a big difference.”

Stoneham continued to put pressure on the Wakefield goal and about 20 minutes after conceding the opener, the Spartans leveled the match. Some good ball movement opened up the Warrior defense and led a Spartan player in on goal for Stoneham. Hickey was up to the task to keep out the initial shot but the rebound came to another Stoneham player who didn’t hesitate to put It away.

The score remained tied at 1-1 until halftime.

In the second half Wakefield came out and got ahead quickly once again. As the battle for possession went on early in the second half, Allee Purcell played a long ball up forward for the Warriors. Amidst a slew of attackers, the Stoneham keeper Stephanie Molinaro took a foot to the throat, sending her down in a heap. The ref ruled the play to continue and with the ball resting just yards from goal, Czarnota was in the right spot again. She pounced on the loose ball, rocketing a shot into the roof of the net, giving the Warriors a 2-1 lead just 2:45 into the second half.

“Having somebody like Kelsey Czarnota is extremely significant and important because she is a finisher,” Marshall said. “One of the things we work on so much in practice are those finishes.”

About 20 minutes passed of jostling for possession and playing the ball out wide, before Stoneham’s Alyssa McCarthy leveled the score once again at 2-2.

As the clock ticked on in the second half and girls started to get tired legs, the tackles became a little rougher and the passes got a little sloppy but there was time yet to play.

In the last minutes of the game, with the final whistle looming just minutes away, Wakefield hoofed the ball up the field. But Stoneham’s looked to be favored to claim the ball with the goal keeper coming for it. The ball however, fell short in between the defense and the goalkeeper, taking one big bounce. In that time, a well-timed run by Hailey Lovell placed her in perfect position. As the bounce rested at a perfect height, Lovell headed it over the goalie and into the net, thrusting the Warriors ahead 3-2 at 39:20 in the second half.

“On that last play, it was about just never losing the mindset that we can win,” said coach Marshall. “Grace Hurley is so patient and amazingly skilled. She hit just a gorgeous little popover and Hailey Lovell is only a sophomore. She is an extremely talented soccer player. She read when the goalie was coming and was able to just pop it right in.”

With little to no time remaining, Stoneham had no time to respond and the final whistle blew, sealing the win for the Warriors. They led twice and two times they allowed Stoneham to tie the game. But the Warriors’ resilient nature showed as they pushed on and got the game-winner very late.

“I’m so impressed with the fact that they were able to do that,” Coach Marshall said of the team’s ability to come out with the victory. “It speaks a lot to their maturity.”

Coach Marshall was glad to have been handed a boost to her squad as she got a good report from the trainer on some injured players before the game.

“We still have some significant loss right now due to injuries, Christina LeBlanc being one but we have a lot of players coming back from injury,” Marshall said. “We have Jill Fiore back, we have Christina Freni back, we have Abby Chapman back and even though they need a little bit of time for them to be as physically fit as we need them to be this season, they’re back dying to play and it made a difference today to have those key players back.”

The win was also nice after a pair of one-sided losses to Belmont and Woburn. Wakefield dropped a 5-1 game against Belmont last Wednesday at Harris Field and lost a 6-1 contest against Woburn on Friday night at Woburn High School.

Wakefield is now 3-8-2 overall and 3-7-2 in the Middlesex League Freedom division. The Warriors got a much needed win to keep its state tournament hopes alive. Wakefield will have to win all five remaining contests to clinch a berth.

So his is a big week for the Warriors as they head on the road for their next two match-ups. Wednesday the Warriors head to Wilmington to face the best team in the M.L. Freedom division and Friday they face off with rival Melrose.