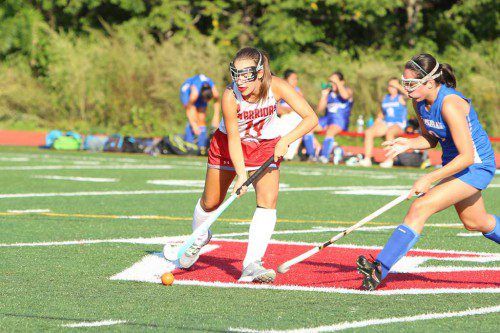 JUNIOR MIDFIELDER Briana Cieniewicz brings the ball up the field in the first meeting against Stoneham. Yesterday in the rematch at Stoneham High School, Wakefield received some strong all around play from its entire team as it routed the Spartans, 5-1. (Donna Larsson File Photo)

STONEHAM — Most field hockey teams in the Middlesex League, including the Warriors, don’t play on a natural grass surface any more since most of the fields are turf facilities. So headed into yesterday morning’s game against Stoneham on the grass field at Stoneham High School, there was concern among the Wakefield coaching staff especially since the Warriors had lost four games in a row.

The change was exactly what Wakefield needed to end its slide.

The Warriors scored early and often as they routed the Spartans, 5-1, to sweep the season series and earn their fifth victory of the season. The win also came after a disappointing 1-0 setback against Woburn on Thursday at Beasley Field.

“Today was a good day for Wakefield. We have had four straight losses and needed this win,” said head coach Cara Luca. “Myself and my assistant Maria Kenney were worried about playing on grass. We have been on turf all season and people don’t realize that field hockey on grass is a totally different game. Wakefield adjusted well and we came up on top.”

The Warriors scored two goals in the first half and led 2-0 at halftime. Wakefield added three more scores in the second half while surrendering just the one goal to record the win.

In goal, Molly Leach, a junior, made four saves.

“Our midfield line led by junior Meg Horrigan was on point today,” said Luca. “They were in the right position backing up offense and recovering on defense.

“Defensively we played well also. We worked a lot in block tackling in practice and it paid off,” added Luca. “Molly had a great game in net. Stoneham was awarded a penalty stroke in the second half and this is the first one of the year for Molly. Stoneham went left, high corner and Molly blocked it recording a save. I was really proud of her.”

Wakefield was unable to put the ball in the net against the Tanners and were blanked 1-0.

“The team was off that day. We did not play as a team and we did not execute at all,” said Luca. “This is the first game in a week that we were unable to put the ball in the net. We were able to score against two powerhouse teams (Belmont and Winchester) but fell apart against Woburn.”

Wakefield is 5-8-0 overall and 4-8-0 in the Middlesex League Freedom division. The Warriors need eight points in their remaining five games to clinch a state tournament berth.

The Warriors host Bedford this afternoon at 3:30 p.m. in non-league game at Beasley Field.